What Difference Does it Make?  Featuring Dan Pratt

Theory of Revolution is a conscious rap collaboration between Amish Space Station and Eric Dubay debunking Darwinism. To learn more about why macro-evolution is a pseudo-scientific hoax, please see my documentary Evolution and Dinosaurs Debunked: https://www.youtube.com/watch?v=DtCIp9sgiE0

To hear more from the Amish Space Station, please subscribe to his channel here: https://www.youtube.com/channel/UC0RMXjY3tuZcyBRBqLpHGCQ

Legal Killers is the latest track off my upcoming conscious rap album with DJ Rob Instinct. 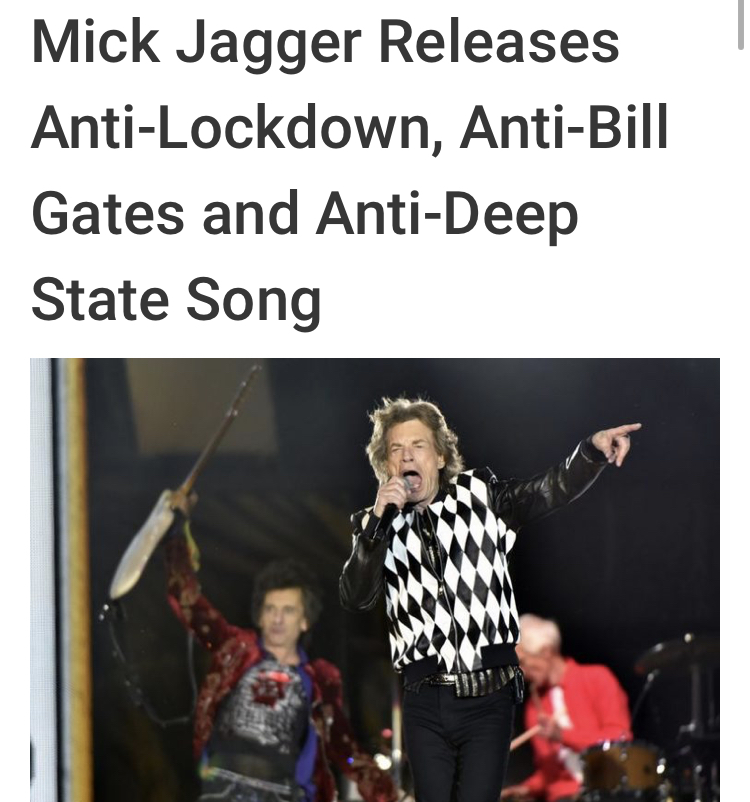 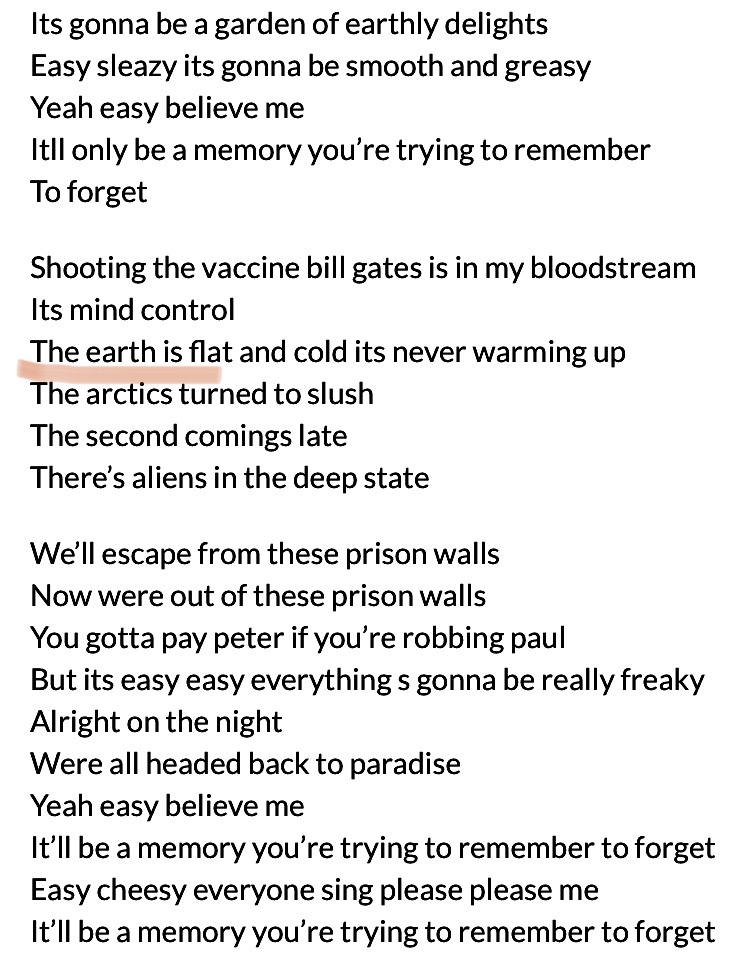 Hi everyone, I've just finished a short freestyle poem about FE and Zeteticism. I'd love to hear someone with more musical prowess than myself put it to music. Hope you all like it:

It’s plain to see
It’s a plane you see
Not a planet with a deceitful ‘T’
Perspective explains ships at sea
That seem to be dipping
Over a curve? You must be tripping
Vanishing points, lines of convergence
It’s time for Zetetic resurgence

Math replaced experiment
To humanity’s detriment
Open your eyes, the mind will follow
The words of NASA are totally hollow
Lies to disguise the deceptive as wise
Pretending to be
True authority
To deceive both you and me
Look for yourself, and be set free
Our senses inform us of reality
Drop the chains on your brain
It’s humanity’s plight
Stop and think for a moment and you just might
Realize you’ve been lied to for all your life 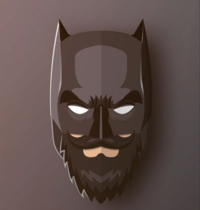 Guys, has somebody noticed the very first seconds of the Sweat Dreams videoclip (Eurythmics)? I was just schocked, right in your face hahaha!!  And the rest of the video clip just all flat discs on the walls xp
https://www.youtube.com/watch?v=qeMFqkcPYcg

Lyrics taking suddenly another very clearer meaning. Anybody would know any info about that?
cheers!

teoh wrote:Guys, has somebody noticed the very first seconds of the Sweat Dreams videoclip (Eurythmics)? I was just schocked, right in your face hahaha!!  And the rest of the video clip just all flat discs on the walls xp
https://www.youtube.com/watch?v=qeMFqkcPYcg

Lyrics taking suddenly another very clearer meaning. Anybody would know any info about that?
cheers!

Wow, nice find. Have watched that video many times for decades, in ignorant brainwashing you never grasp it right, lol.

Hope this is the right place to put this video and the stills i pulled from it.
So I was just chilling and listening to some music and this came up.
I don't think anyone else has posted this before. If they have apologies.

He summits Everest at 4:35am on 1st of June 2021 as stated in the video.
It is footage of up to 2160p 4k quality.
Summiting occurs at 2:31 into the video.
It is shot on a normal camera no fish eye.
Duration of First clip is until 3:00
2nd Clip from 3:38 until 4:03
This is what really peaked my interest pun intended.
The Shadow is a depiction of the Mountain top.
There is a Distinction between the top or tip of the Shadow projected and the bottom of it.
This is a clear indication that the Sun is locally situated.
A globe earth sun would create a uniform shadow not one such as we see shown.
It could only project a shadow in this manner by lighting it from a nearby location at a near horizontal angle.
By near horizontal I mean slightly angled above the summit, not the ground.
Specifically lighting from a point that is not rising from the horizon but is above ground level and of a location near to it.
Cloud layer is shown on both sides of the mountain (sunny side and shadow side) it indicates that it is of a uniform height on both sides.
That this shadow distinctly sits atop the cloud cover on this specific mountains side (shadow side), indicates this shadow is specifically a projection of the area of the mountain above those clouds.
It could only occur if the light source (Sun) and the object casting a shadow (peak of Everest) where at respectively similar heights.
That is not to say that the Sun is at a height of equivalence to the peak of Everest but of a similar perspective based height. and by this I mean, more similar than one of them being millions of miles away. 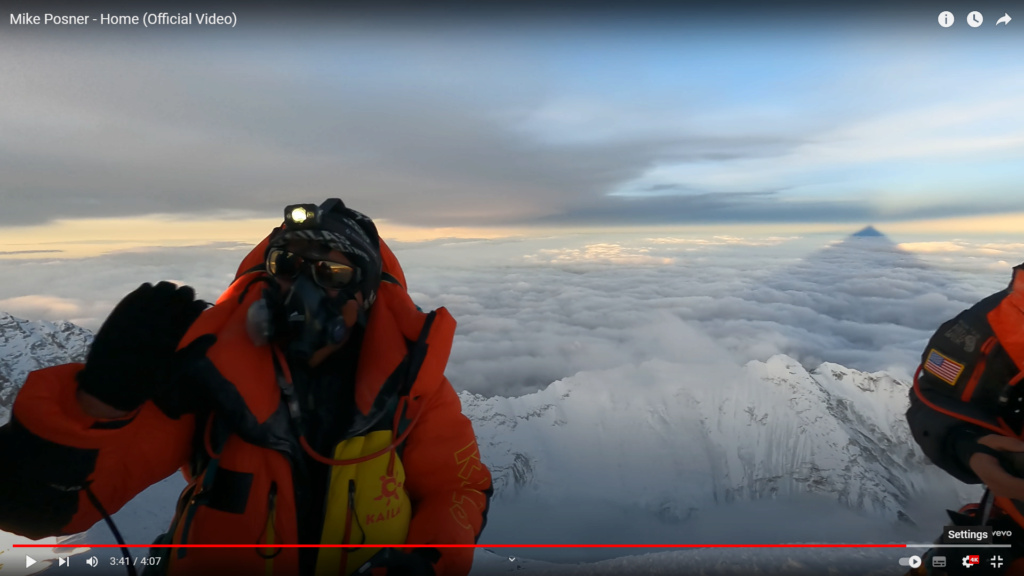 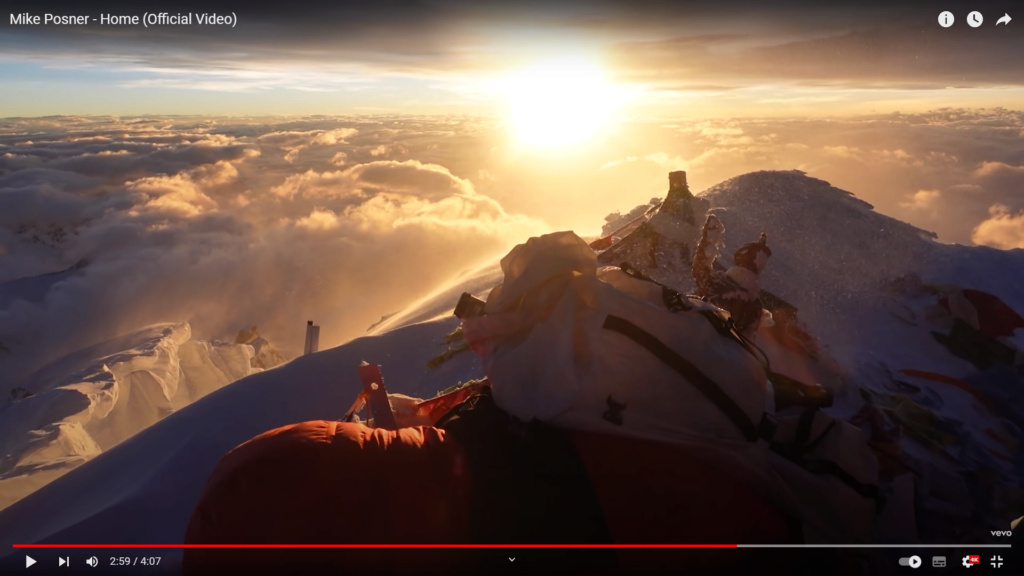 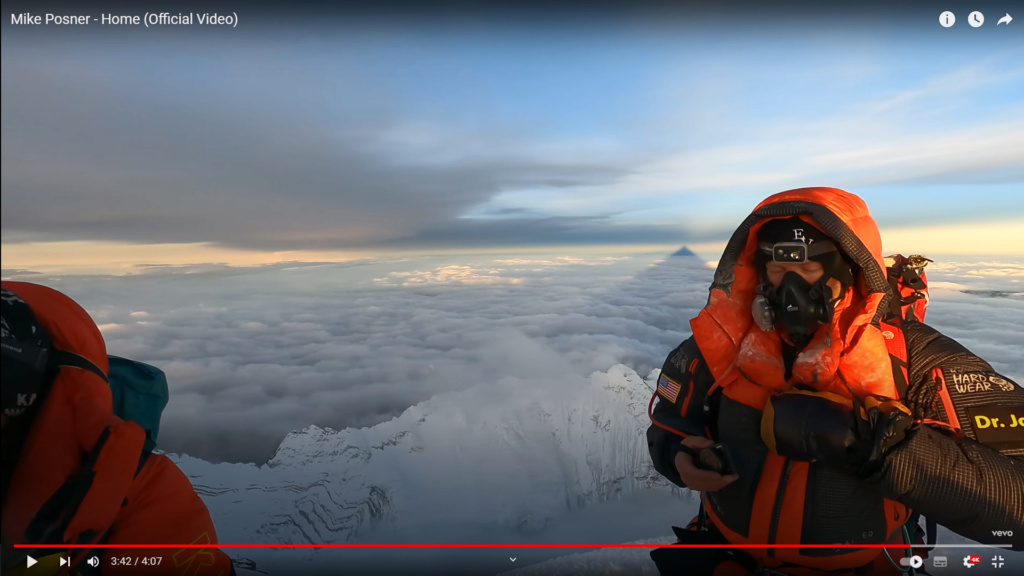 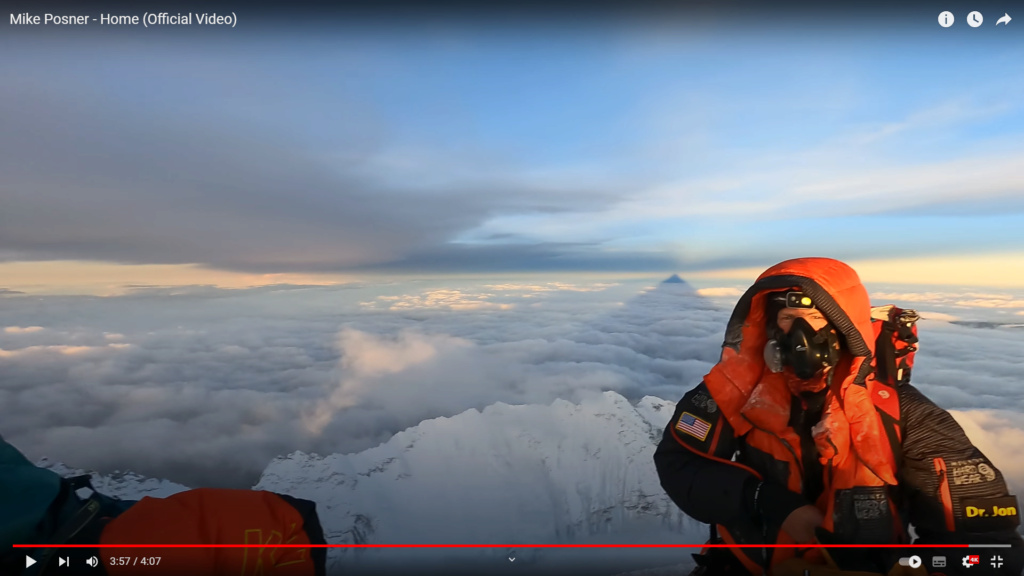 The last two images are to indicate what I premise here to be true and to affirm the statements made.
The cloud center and then center left of these last two images moves from the peaks shadow into sunlight (half lit denoting the peaks edge).
This indicates a trajectory consistent with locally sourced lighting.
The lack of curvature is also a topic worth discussion.
The horizon at this height should not be at eye line, which is where the camera on Mike Posners head is situated and where the camera shows the horizon to be.
The shadow formed should also indicate a curve as it is projected onto a sloping downward horizon. Yet we see the point of the summit as a sharp right angle the shadow showing the silhouette flatly over the full distance to that flat horizon.
Even while its being projected hundreds of miles away from the peak. An impossibility on a globe earth.
Feel free to include any observations you find or make.
And thank you to Mike Posner who just made a significant contribution to the Flat Earth Community.

Can I post anti-capitalism/anti-establishment music here too, or would you rather this section stay Flat Earth specific?

Coincidentally stumbled upon this music video from B.O.B. - ted talk
B.O.B. mentions Eric Dubay in this one.