NASA are pioneers in the field of claymation too. They've done it all!

Should we have a separate SpaceX thread? Putting this here for now:

Eric, i think we need on IFERS new topic- Other world space agencies. Maybe there is but  I couldnt finde.

This is one Iranian cute astronaut :

Iran says it has successfully sent a monkey into space for the second time, as part of a program aimed at manned space flight.
President Hassan Rouhani says the monkey, named Fargam (Auspicious), has returned to Earth in perfect health.
14 Dec 2013,
http://www.abc.net.au/news/2013-12-15/an-iran-sends-second-monkey-into-space/5157346 He was good trained to become astronaut , we can se on pictures:

One nice picture from space from Iranian Space agency from their official site :
http://isa.ir/page=NewsDetails&newsId=1035 Great post, thanks, that satellite picture is ridiculous, feel free to start a thread about Space X CSP, or about other space agencies Themis.  Peace

Everyone seen the latest "earth rising" image from NASA? LOL 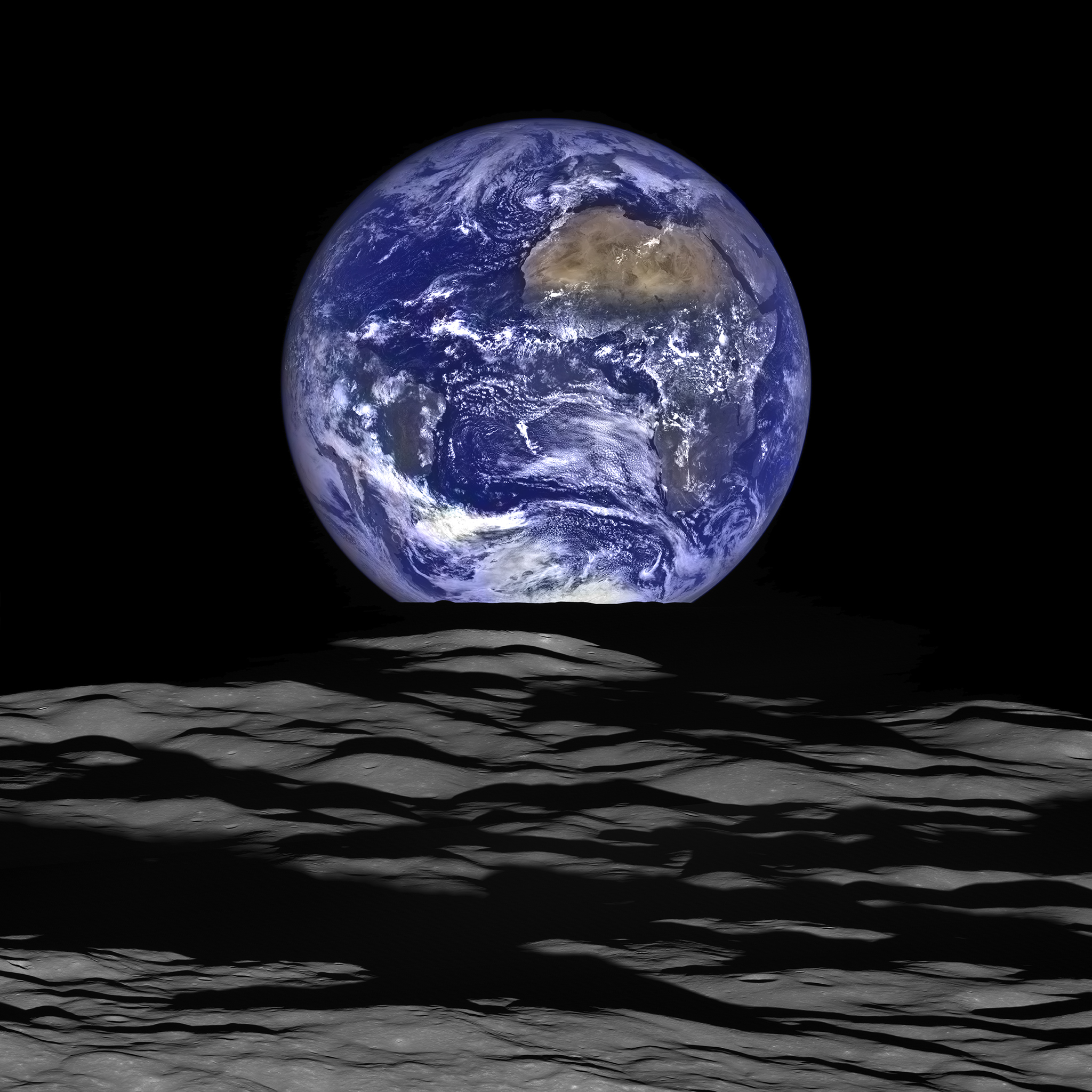 One thing I love about the perfectly-undisturbed views from space is how fake they look, like somebody just spent 10 minutes in Photoshop.

I came here to say this looks sooooooo fake.
Especially if you look on the ground (moon). It's so sharp and not even blurry in the distance - propably due to the missing atmosphere.

I was going to say it looks like a render.

I don't know about other people, but to me the Moon almost looks computer generated. I'm not calling it fake, but why does it look that way?

Wow, it's like their CGI skills are getting worse over time... glad people are seeing-through the obvious bullshit.

To watch this video Right-click -> Play, or you can do Show Controls if they don't appear automatically.

This guy says so much that gives the illusion away. First he says basically everything we've seen so far has been a computer animation or aided by Hollywood(how are those two things different?). Now we're to suspend disbelief simply because he says to and trust that THIS animation is real. Not only is it "real" but it was a video made by a series of pictures taken from the Juno spacecraft heading to Jupiter. So we're supposed to believe that we can shoot a bullet probe towards Jupiter from Earth that can take pictures on the way of the object it's eventually going to land on... They can't EVER keep their reality within the SCOPE of the reality heliocentrism requires(jet propulsion in a vacuum for example). You can't just aim something towards Jupiter and have it land there, it's a moving target. You don't aim where it is, you aim where it's going to be, ergo you'd never be able to take photos of it on the way because it wouldn't BE THERE. 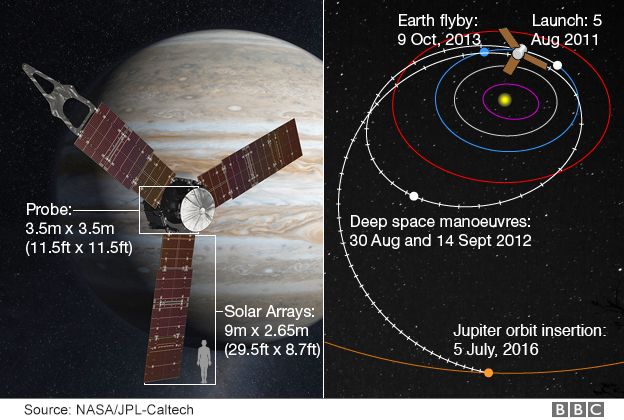 Even their own demonstration debunks themselves.

They also can't EVER EVER EVER produce a single photo from outer space with stars in it. The camera can pick up Jupiter's moons which have hundreds of times less magnitude yet can't pick up a single star.  Apparently only the Hubble can take pictures of stars, a "space telescope" from 1990! WTF else technology-wise are we still using today from 1990 other than a microwave oven? Our cellphones are more powerful than the server farms of that era.

NASA wants us to trust and believe them, they COMMAND that we do. Then they show us this patently blatant bullshit over and over, DSCOVR "photos", now Juno "photos". The Mars race is now supposedly on even though we can't even get BACK to the Moon. 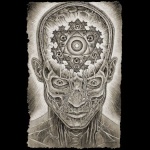 damnice wrote:
This guy says so much that gives the illusion away. First he says basically everything we've seen so far has been a computer animation or aided by Hollywood

I have just gotta laugh, how much do they pay these guys to sit there and talk pure shite. 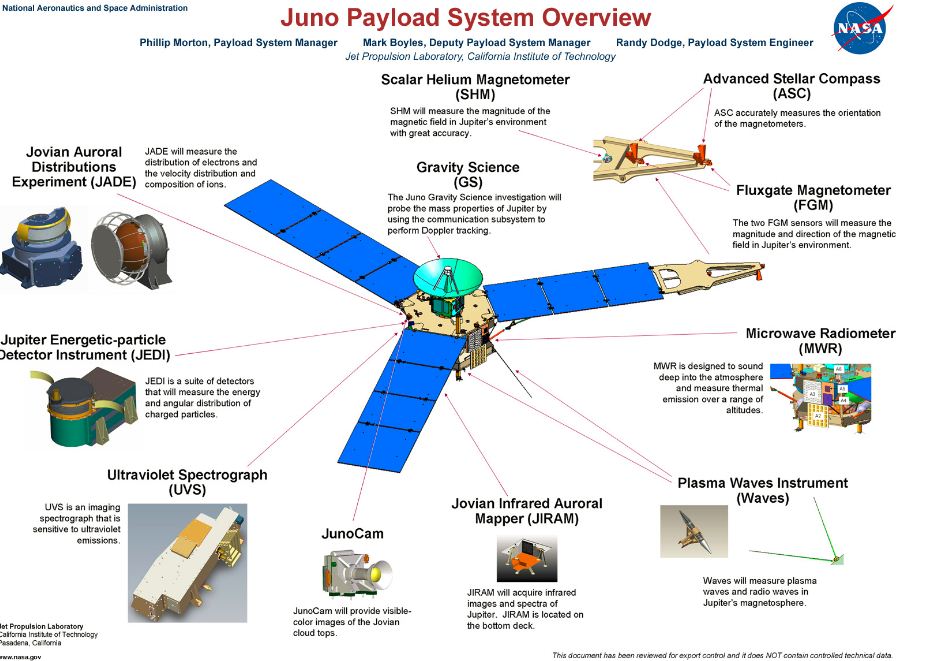 The supposed ball earth from 1 MILLION miles, this is supposed to be showing the earths 1 year cycle, 365 days...
Yet if you count the rotations in the video there aren't nearly even 200 rotations. LOL. They should hire someone else to fake their videos.

Hahaha, that eclipse shadow.. some of the worst CGI I've ever seen. Even I could come up with something better than that, and my editing skills are mediocre at best.

if that's 1m miles away and the moon is 250k away then moon should be visible; CGI budget for that "epic" video must have been cut and transferred to the hookers and blow budget but they released it anyway because they know they can get away with anything

Not a single other satellite in sight either.. strange

csp wrote:Hahaha, that eclipse shadow.. some of the worst CGI I've ever seen. Even I could come up with something better than that, and my editing skills are mediocre at best.

A retard and chance could come up with something better than that.

I found this image on what looks like a very old and forgotten university webpage. It looks like it could be a very old release of this 'iconic' hoax photo pre-Photoshop manipulation. I couldn't find another instance of this image (photo isn't the right word) online with these anomalies.

Before and after increasing levels. Something very strange going on around the Earth if you ask me!

Skywalker wrote:I found this image on what looks like a very old and forgotten university webpage. It looks like it could be a very old release of this 'iconic' hoax photo pre-Photoshop manipulation. I couldn't find another instance of this image (photo isn't the right word) online with these anomalies.

Before and after increasing levels. Something very strange going on around the Earth if you ask me!

You couldn't make this sh@t up brother.

No wonder NASA photoshop trolls scour the internet looking for old NASA pics to 'touch up'.

I'm sure everyone here is familiar with the 2015 DSCOVR image clearly showing 'SEX' in a could formation.

Well, this tradition could date as far back as 1960. I found the following image of supposed real cloud formations taken by TIROS (Television Infra-Red Observational Satellite) which was launched on April Fool's Day 1960! 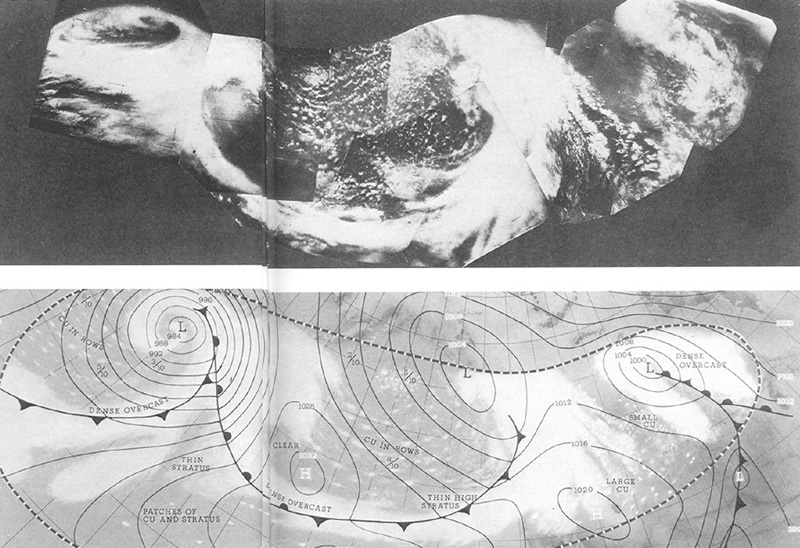 Flipped upside down, do you see it?

Anyone got a take on new film Operation Avalanche? Feels like double think to me..

Not so much video fakery, but radio fakery:

Ha ha.
Amazing that a 5W radio transmission can travel 300,000km, but the Earth-based transmitters require a minimum of 100kW (20,000 times as much power) to transmit over a range of 2500 square kilometers.
A 5W / 15W transmitter has a achievable transmission distance of 3-4 km (1.9-2.5 miles) in the open air - (you would need a 50kW transmitter to reach Earth from the Moon).
Even accounting for the 'lie' of the vacuum of space, you would need a minimum of 9kW, (1800 times more powerful than the 5W they allegedly used)

And call me a cynic, but this just happens to be an editor of a newspaper who received this transmission!
No doubt he is a Jew/Freemason too.

Yup, a Jewish Freemason just like Abraham Zapruder lol! These guys just seem to be in the right place at the right time!

I finally wasted enough time to catch the actors over at Nasa Livefeed. Started watching the feed during my breaks at work, around the same time all week. I noticed something weird... the clouds are exactly the same as last night, the actors are doing the exact same thing on their spacewalk... Is this just one big loop? Take a look... 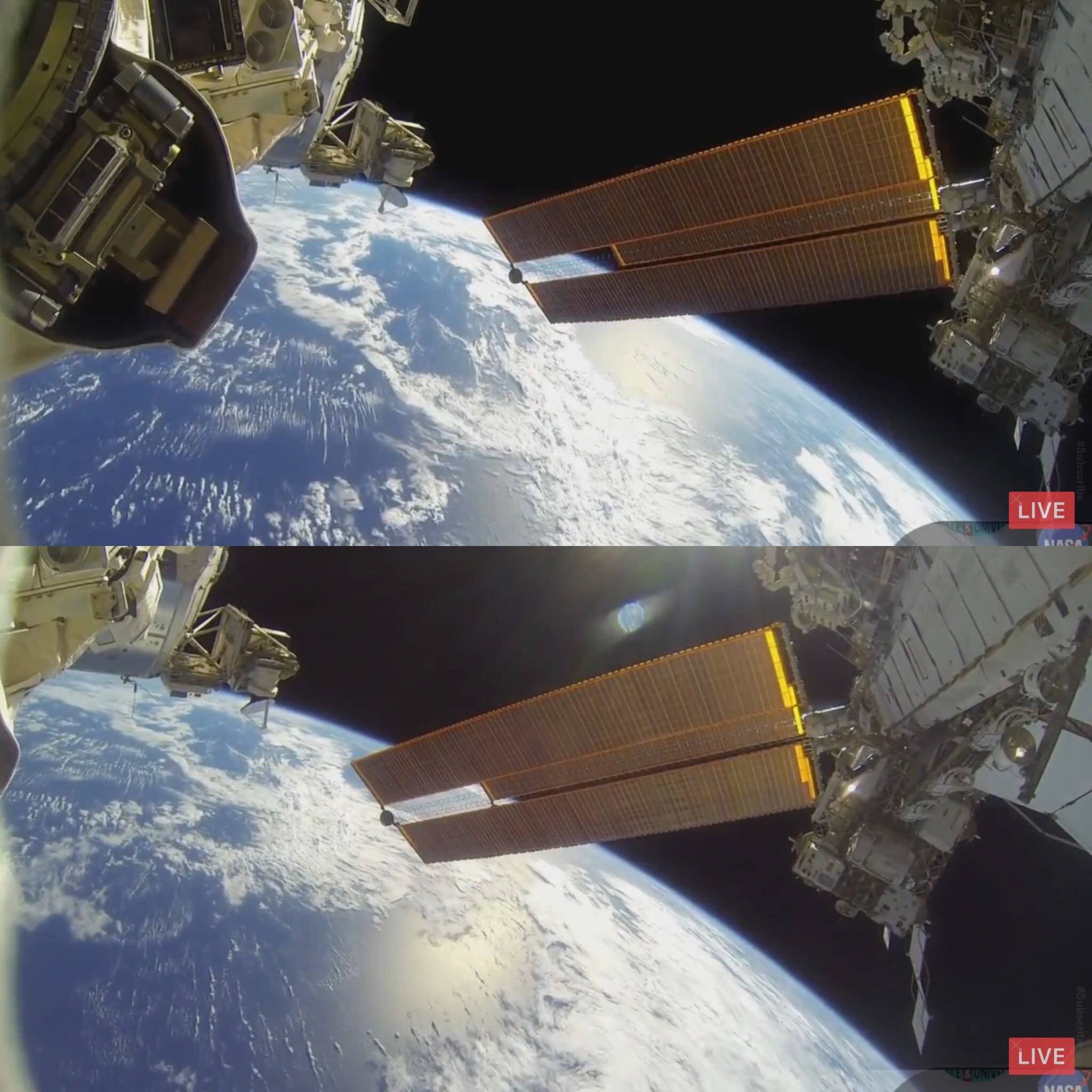 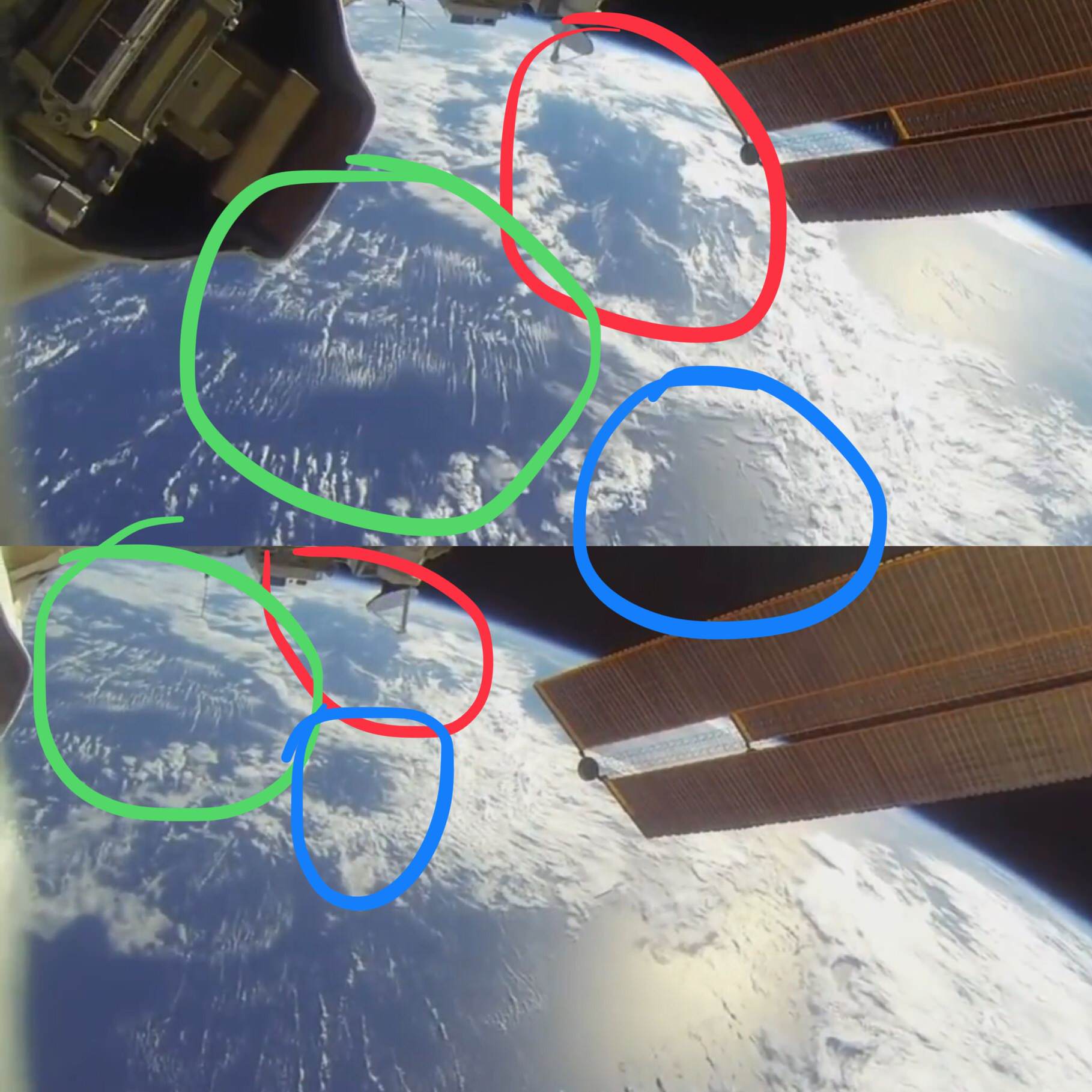 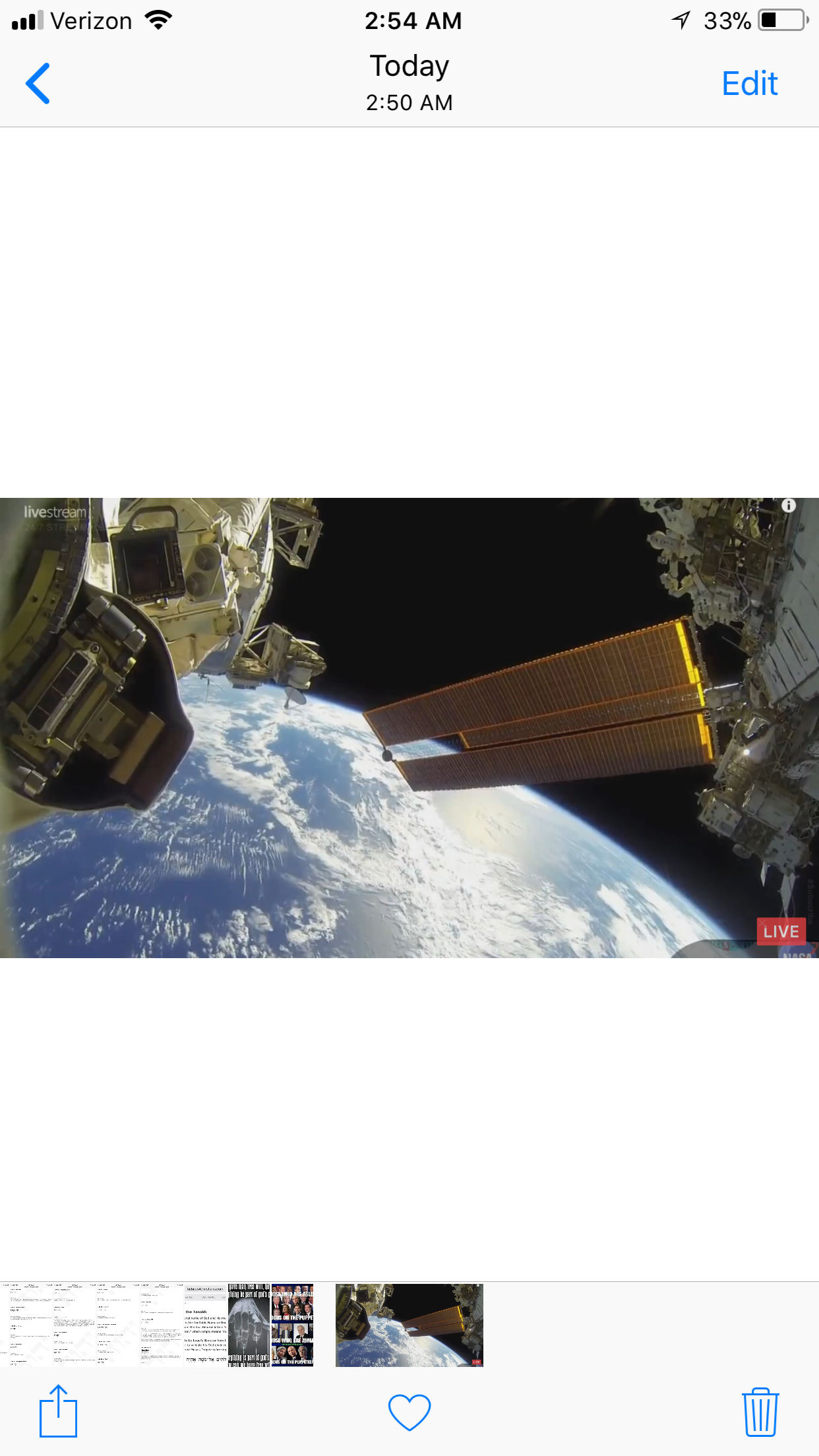 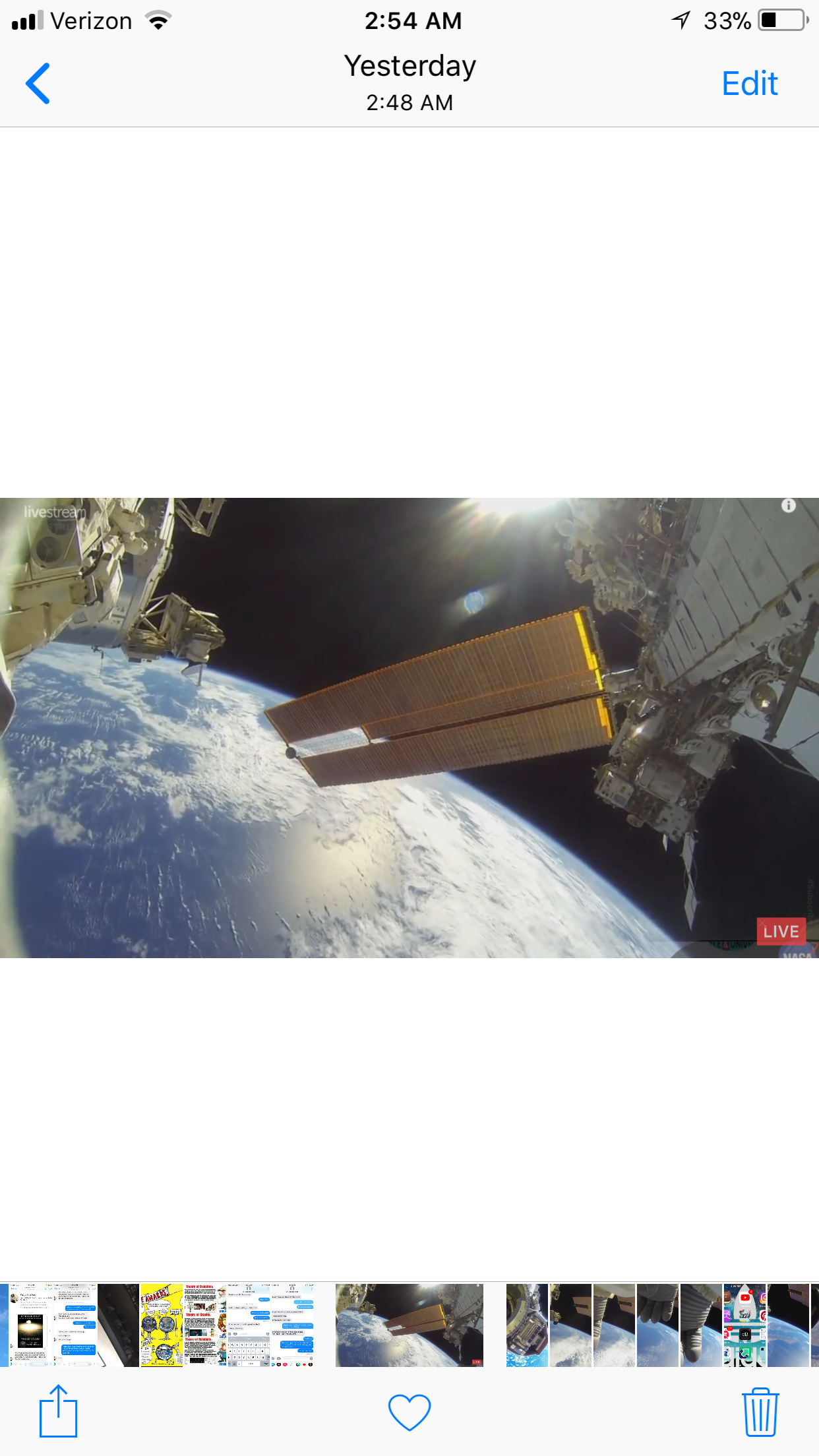