here are a few pages i found from old newspaper archives of reference to flat earth. feel free to add more. its interesting to see how the same questions and problems with the globe model have been addressed threw the ages.

its also interesting to see how some of the propaganda developed

here we see references to flat earth belief and a few sentences down that the rocker fellas must be godly men because they are rich ? interesting

Yes, thanks Jericanman, this kind of research and detective work is exactly what I'm hoping people will contribute to this "research society" forum!

here we see the same old "proofs" for a round globe earth.

preacher proves flat earth by the bible but wont believe it.

the quote from the end is the best. "i have always believed the earth was round and not flat, this was just a test of logic" !!!!!! now that's laughable. so logically its flat but he believes its round.

some more propaganda, this time an article about moving away from gold and silver standard and towards fiat paper money, gold standard is equated to flat earth as foolish and hardly worth arguing against.

wowzers so a new dumb propaganda piece , with references to successful propaganda of round earth. and we all know how well fiat money worked out for everyone.

lady blount the sun does move , and bedford level experiment.

i could go all day, but id encourage others to also use the search feature at the library of congress newspaper archive site, ive been working threw the hits for "flat earth".
phrase searches regarding particular experiments and figures in flat earth history and terms might get even better articles.

i have been using this search feature of the digitized micro phish films to author a book on the subject of giant skeletons , wild man reports, sea monsters and other strange oddities. i thought id have a look to see what i could find on flat earth and was pleasantly surprised.

foucaults pendulum from round earth perspective.

and from a different paper

its interesting to note that even in 1902 the process of just straight up copying news articles from paper to paper was already in full swing.

dear bill we are taught the earth is round but have no way of knowing. (brilliant mini letter bashing Darwin and round earths in one fell swoop)

wilbur voliva of zion city (short one but will have to delve further into this interesting sect, as many references to how they teach flat earth model.

brilliant qoute from this one regarding flat earth

"it is fortunate for the progress of science that this cosmology was not adopted by everyone, not that it is absurd, but on the contrary because it is so reasonable"

its funny in these older newspaper clippings they dont try and say that flat earth is nonsense or absurd quite the contrary. But they need to progress their "science" regardless, so laughable. dont think we would catch the modern propaganda machine admitting to that.

Charles bishop another flat earther , at one point mentions that he thinks the sun is electrical not fire, his arguments also seem week. or they only portray the weeker ones. this is most likely a propaganda s this is in 1921. the later dated pieces are more hostile to the idea.

wilbur voliva of zion city again. here we see the double think in action. the writer of this piece is criticizing wilbur voliva of only teaching one version of cosmology and not letting the children decide for themselves. (i wonder if any other schools of the day would teach flat earth principles and arguments) and also it is mentioned how the children readily understand flat earth because it is more reasonable and can be verified by their senses.

qoute ""the child must be permitted to reason everything out for himself" sounds reasonable... well its a propaganda job. so no indoctrination is the plan here despite also saying one should decide for them self's, the writer goes on to say that the idea of reasoning for ones self is wicked.

this is cognitive dissonance or double think at its best or worst , depending on your viewpoint. its a real lol moment reading this wondering how the person who penned it could be holding this conflict in their head.

flat earth in a court before judges

shooting shells into space??? is this the first instance of the idea (propaganda) of satellites ??

here we see the "teaching method" or indoctrination of children into the round earth. with the ships going over the horizon fallacy , never do they mention a vanishing point. they do however set up a bad experiment show the children then tell them it is "proof" of a round earth.... oh dear... same old same old.

and here we see the start of the propaganda of the theory of a central sun (not our sun) in this sense the center of the galaxy i guess, but this is probably before they had such terms.

note how its all speculation.

voliva planns a trip round the artic ice rim... interesting

just a side note ive read a fair few off topic pages about voliva and zion city. seems he was a bit of a cult personality. irregardless of that im still trying to find if he ever actually made a trip round the rim. and what was reported about it. or if anyone else from his organisation attempted it, or any story's about him coming back.

any help would be great i haven't found anything yet but it would be interesting.

The relevance of flat-earthery to the dispute over teaching evolution was apparent well before the Scopes trial. In 1922, Edwin Grant Conklin, then a professor of zoology at Princeton University, took to the pages of The New York Times to castigate the antievolution crusade recently launched by Billy Sunday and William Jennings Bryan. After sketching the evidence for evolution, Conklin lamented, “If only the theological opponents of evolution could learn anything from past attempts to confute science by the Bible they would be more cautious.” Exhibit A was the shape of the Earth. Despite denunciations of the idea that the Earth is a sphere as opposed to Scripture, Conklin wrote, “Today only Voliva and his followers at Zion City maintain that the earth is flat, and the heavens a solid dome, because this is apparently taught by the Scriptures.” Evidently Voliva was famous enough not to require any introduction then.

The USNP staff microfilmed other newspapers affiliated with the Christian Catholic Church in Illinois, including the Theocrat, the Zion Herald, and the Zion City Independent.

The Flat Earth and its Advocates: A List of References

So Im searching and I find this website with an article with the author offering proof it is a ball with a CGI from the Nassholes.

And I start reading the comments and all but one are from flat earthers on FB makin fun of the CGI "proof" , so I friended them.

Some Catholics seek to counter Galileo
Splinter group says the Earth, not the sun, is, indeed, at the center of the universe

This is a literature thread so I will post this article I found from the asshole patrol:

the north pole and paradise

eden at the north pole

i think this is the book by g.r. wieland mentioned above. www.jstor.org/stable/198297?seq=3#page_scan_tab_contents from a quick scan read he seems to hold to a globe model and evolution.. but still interesting that be believes life started and moved out from the north pole area (possibly the location of eden) www.jstor.org/stable/198297?seq=4#page_scan_tab_contents

Hi Jericanman, thanks for the all great articles - I found another site which appears to be in Australia with a whole heap of news paper references (some are similar/duplicate stories):

The Enlightenment of the World by John G Abizaid
This book contains proof that the Earth is flat and stationary, while the sun, moon, and stars are in constant motion.
Also letters showing the testimony of scripture on the subject.
1912

Auguste Piccard. Heard of him in school? Of course you haven't.
He was the first person in history to climb to 52 thousand feet in his balloon and describe what he saw. He also happened to be a professor of physics.

You can read the article on the link that appeared in the August issue of popular science magazine.
He states The Earth looked FLAT with raised edges.

Wow! These are great. Thanx for the links. I look forward to the day we see stories of the FE in our newspapers today - although, I won't hold my breath lol

I apologize if some of these were posted above. I used a different newspaper archive site. Not all of it is pro-flat earth. It's so interesting that NASA and their faux images shut down all public debate about this.

freejack wrote:I apologize if some of these were posted above. I used a different newspaper archive site. Not all of it is pro-flat earth. It's so interesting that NASA and their faux images shut down all public debate about this.

Thanks freejack, looks like there are a few duplicates but also a couple I have not seen before!

Not sure if this is the appropriate place in the forum, but found this to be an interesting link.
http://www.harekrsna.com/sun/editorials/03-16/editorials13718.htm

Just read the article above from the herkrsna site and found this close to the end.

"The concept of a flat Earth is a huge paradigm shift and raises many questions which I can't hope to answer here. For those interested, I refer the reader to the various websites, books, and documentaries available on-line which present evidence and arguments for the flat Earth concept. Perhaps a good introduction is Eric Dubay's 200 Proofs that Earth is not a Spinning Ball which can be read on-line"

Props Eric seems you are being referred as the good place to start.

I was at my friend's shop "He does house clean outs of stuff from homes like when people pass away of just move out and leave everything behind" I guess it happens more than you would think...anyways I was at his shop and I see this picture frame that might fit a poster I have.

So as I look closer at it I notice it has the front page of "The New York Times" and is dated November 29th, 1928

So I start reading it and the word "BYRD" catches my eye there was an entire column on the front page talking about Commander Byrd and how the night before they were having a huge send off party on board his ship " The City of New York" having what they referred to as a "thanksgiving feast" with 25 men onboard.
It was a very interesting short read to the bottom of the column where it stated: "'continued on page "T" of which there was not. as it was just the front page

I just think it is an utterly amazing coincidence that I would find that out of the blue. That I was holding a piece of history in my hands that someone read fresh off the press that early cloudy November 29th morning I will try to put up a few photos of it.
I was reading about this same Byrd adventure the very night before.
What are the chances?
II hope I can post the pictures here, they seem to be coming out sideways .. I Hope that is ok 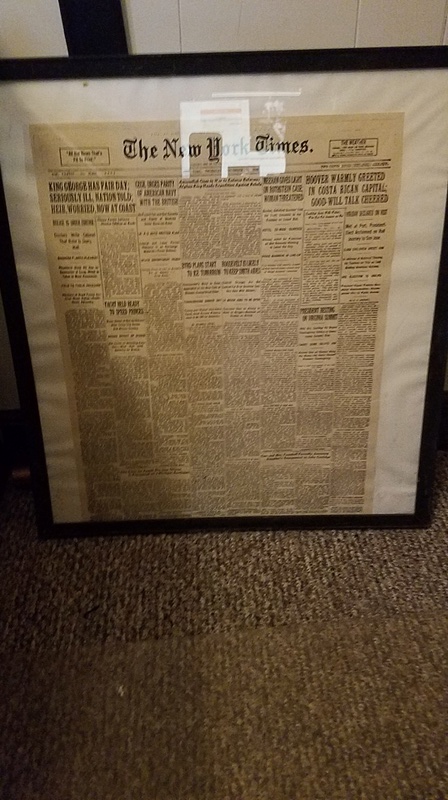 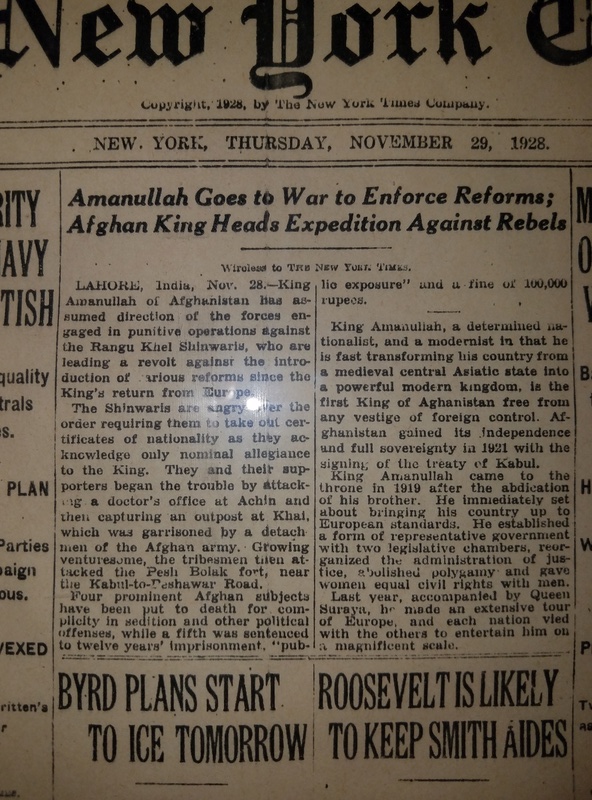 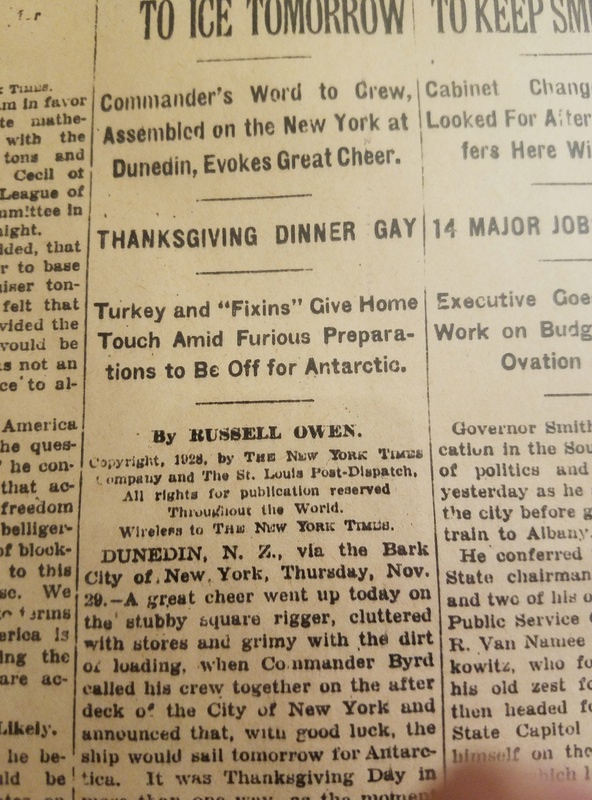 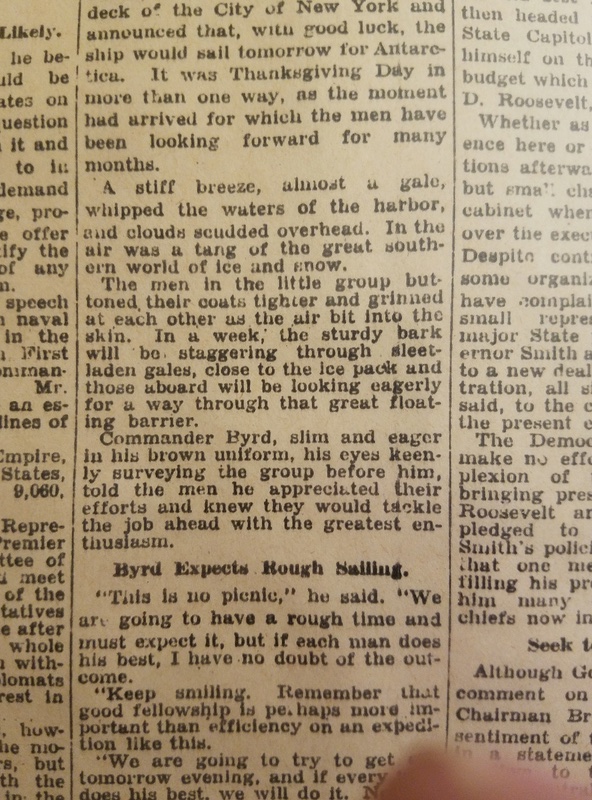 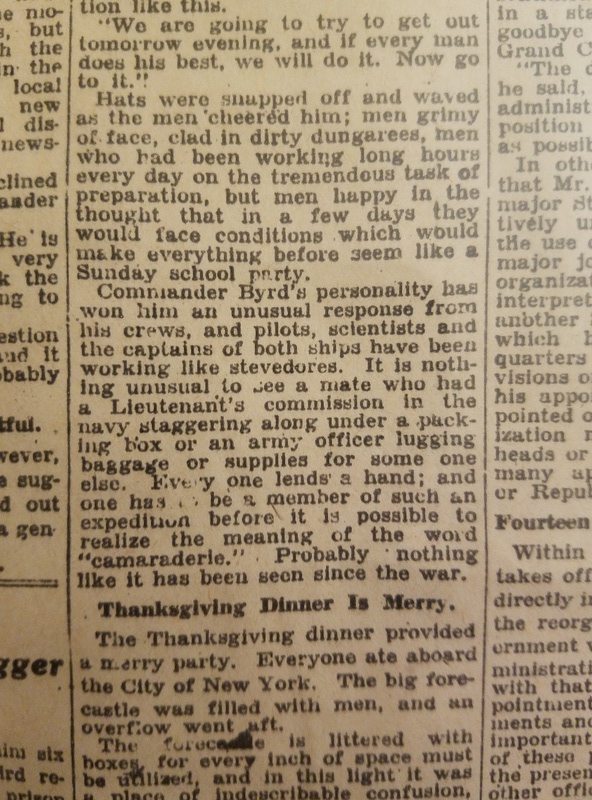