Vedic Astrology on a level plane

Vedic Astrology on a level plane

Understanding how the Sun, Moon and twelve signs of the zodiac revolve and influence our experience on earth.

The Cusp of Aries - considered to be the Prime Meridian from which Right Ascension is calculated. It is one of the two points in this 360 degree right ascension.
The Sun meets the zero degree declination line from south-to-north at the first point (Cusp) of Aries, and, 180 degrees from north-to-south at the cusp of Libra.

During the Spring Equinox the Moon phase is the first quarter moon phase.
The exact moment of first quarter is defined as the time when the moon's eclectic ascension is exactly 90 degrees from the Sun, as observed from the center of earth. 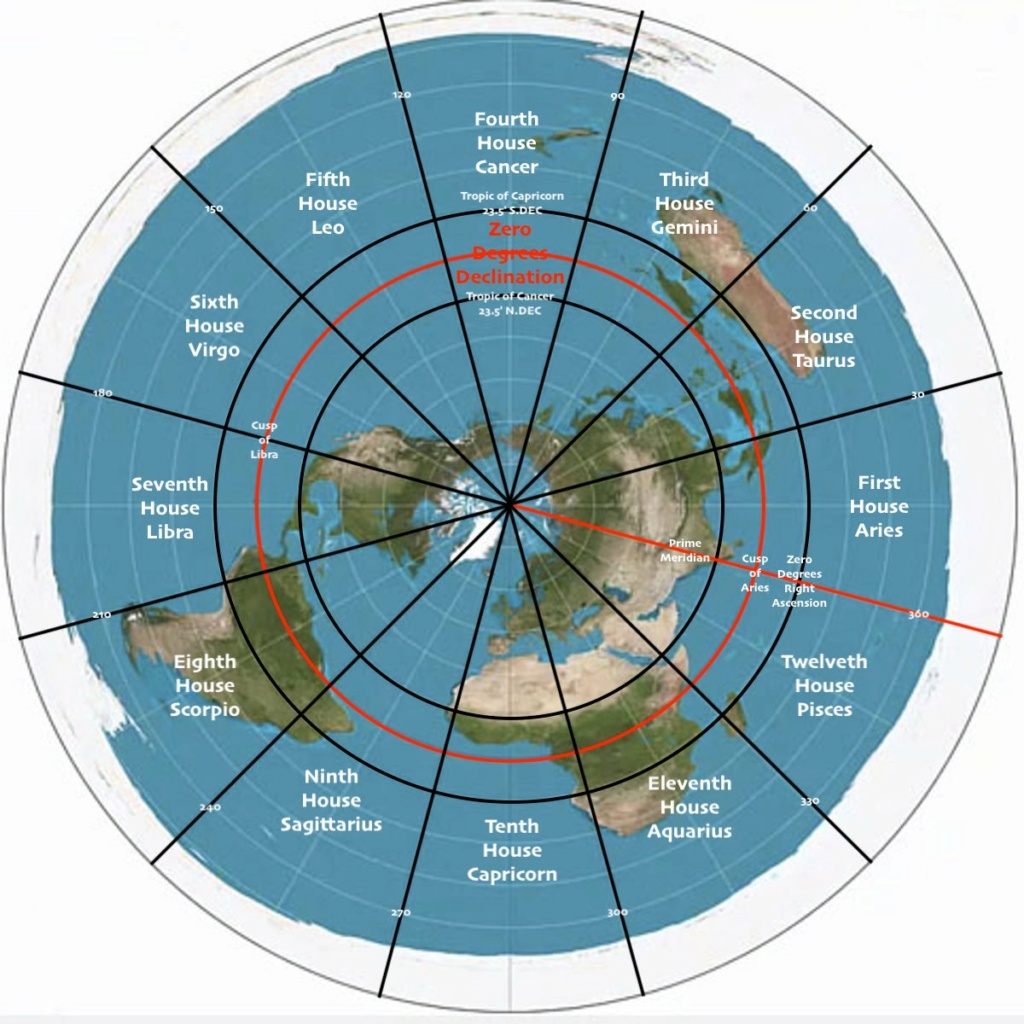 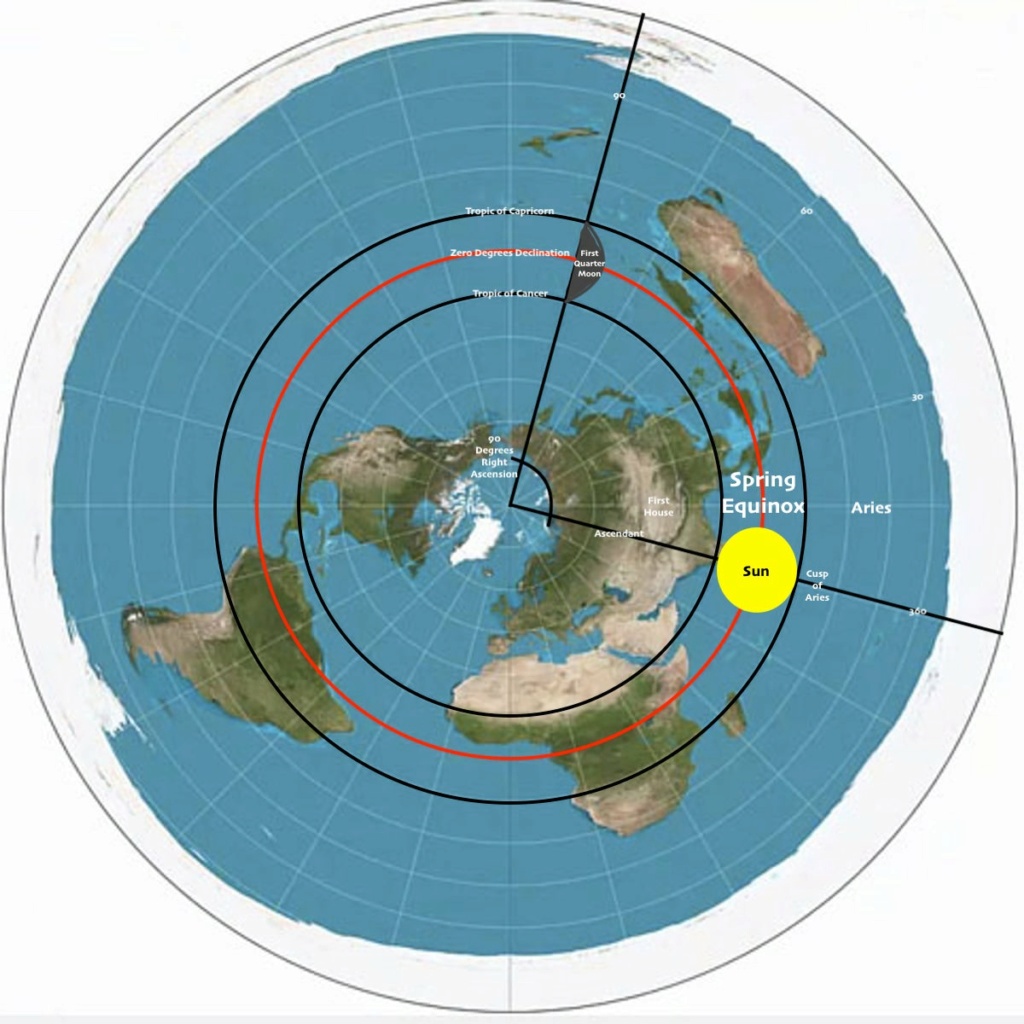 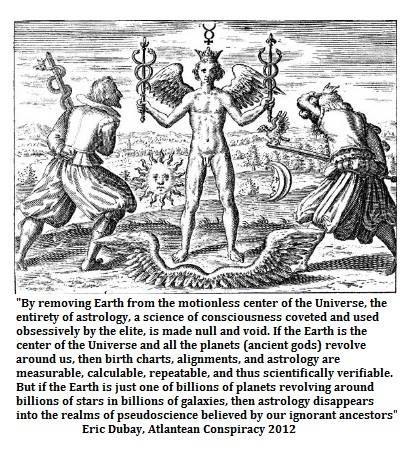 Lanka and the North Pole

Suraalaya, Himalaya, Avanti, Vatsyapura and Lanka;
-Suraalaya or abode of the gods ie, the North Pole.
-Avanti or present day Ujjain.
-Lanka at 0' latitude and 0' longitude.

The Surya Siddhanta is a Sanskrit treatise in Indian astronomy that has this to say about Hindu Meridian:
"62. Situated upon the line which passes through the haunt of the demons (rakshasa) and the mountain which is the seat of the gods, are Rohitaka and Avanti."
In other words, on the meridian line that passes through Lanka, the North Pole, and the cities of Rohitaka (Kurukshetra) and Avanti (Ujjain). 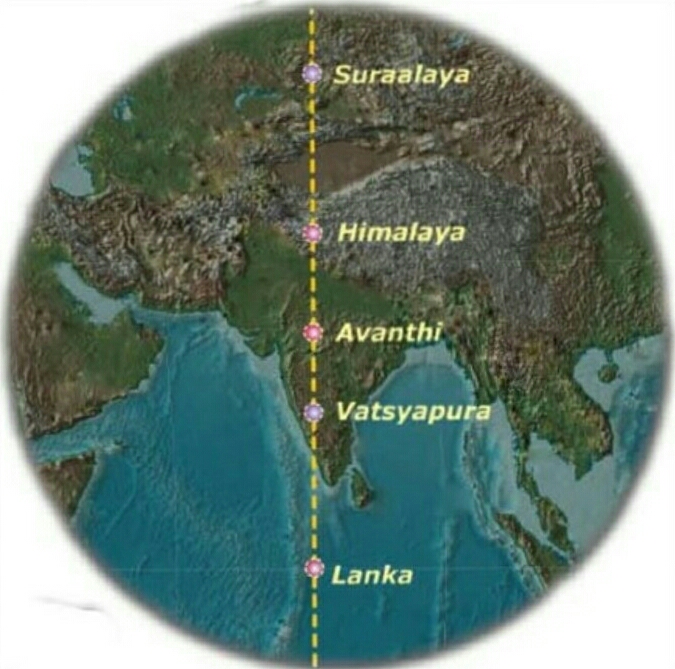 The Phases of Venus and Mercury

One bit of old-time astrology that is largely overlooked in today's emphasis on signs, houses and aspects is the "phase" -- its relationship to the Sun, as seen from the Earth. Much like the Moon, wondering stars such as Venus and Mercury have phases, as we see them conjunct, squaring, opposing, squaring and then once more conjoining the Sun. To earlier astrologers, "phase" was important in judging both its strength and its quality.

The aspect known as "conjunct," where two heavenly bodies such as Venus and the Sun are in the same sign of the zodiac.

We never see Venus more than about 47 degrees away from the Sun. And we never see Mercury more than 28 degrees away from the Sun. Both Venus and Mercury conjunct the Sun, but instead of squaring it, they reach these limiting points before moving back once again toward the conjunction. And their conjunctions with the Sun alternate between the "superior" conjunction (when the heavenly body is farthest the Sun, traveling direct) and the "inferior" conjunction (when it is nearest to the Sun, traveling retrograde).

Retrograde describes the apparent backwards motion as observed from our perspective here on earth.

Placement Chart of the Autumnal Equinox 2022

According to astrological charts during the fall equinox on September 22, 2022 at 6:00pm at Lanka; the moon was in Leo at about 20hrs Right-Ascension from the sun.
The Autumnal Equinox is when the Sun meets Zero Declination from north-to-south at the Cusp of Libra. 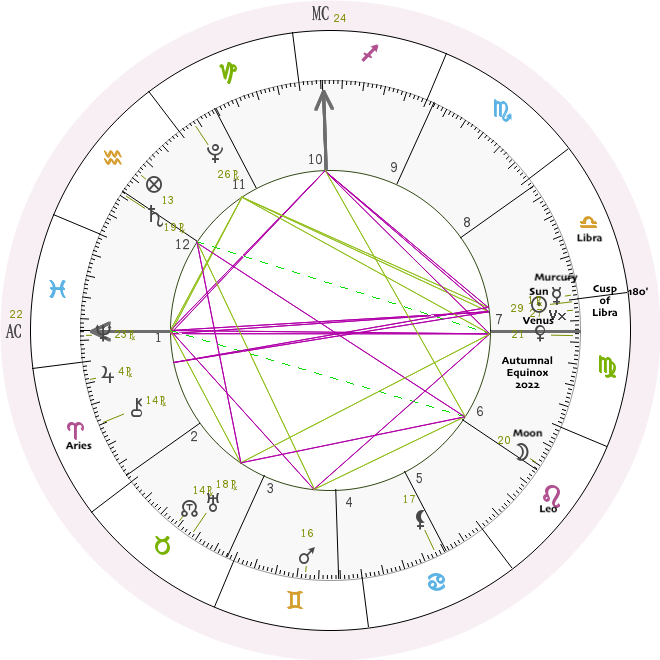 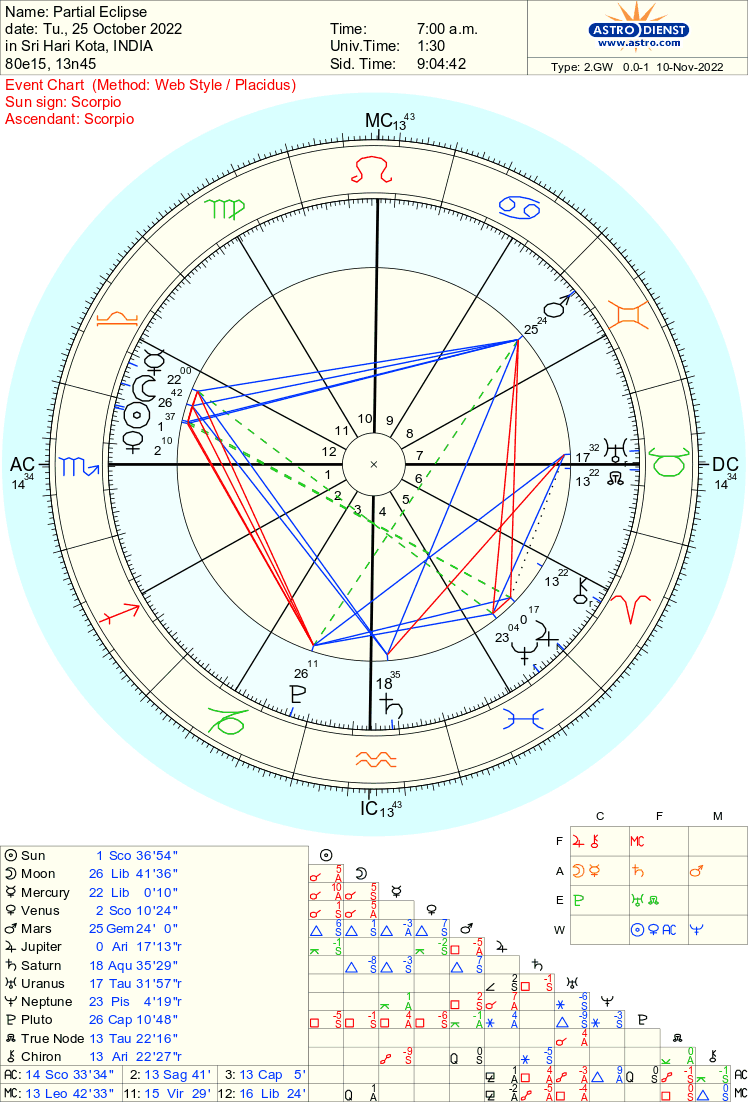 Mercury, the moon, the sun and Venus have all moved into the 12th house of Pisces.

The 12th house is related to the 12th sign in the zodiac, Pisces. This sign is characterised by intuition, isolation and imagination. Besides, Saturn is the natural significator of the 12th house. And the 12th house is weak for the Moon and Mercury.
The 12th house in the horoscope stands for all that you have to detach yourself from. Thus, it includes your materialistic desires.
The 12th house is a very important house for those who are moving on the spiritual path, like monks, sages and people trying to get enlightenment. This house also influences places like ashrams, meditation centres, monasteries, places of worship and so on.

This is an example of an 'Opposition' aspect from vedic astrology. Notice the mention of RA or "Rahu". 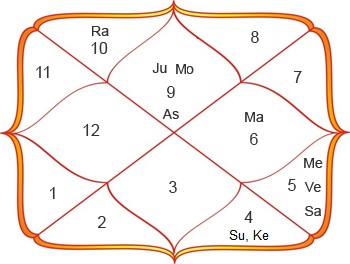 'Opposition' forms when two heavenly bodies are exactly opposite each other, meaning there is a difference of 180 degrees Right Ascension in their placement. In the example chart above, Rahu in the 10th house and the Sun and Ketu in the 4th house are exactly in opposition. Opposition works like "Yin and Yang". While they are opposites, one is not complete without the other. There is a need for cooperation so as to establish harmony. Due to the conflicting energies, irresolution and the feeling of uncertainty fall under the impact of the opposition. Thus, arises the need to maintain a balance, where one must coordinate with the other.

Re: Vedic Astrology on a level plane