Star Trails Prove Earth is the Center of the Universe

Star Trails Prove Earth is the Center of the Universe

Star trail time-lapse photography is absolute proof that Earth is the stationary center of the universe around which everything in the sky revolves.  If the Earth's supposed motion was what caused the star trail effect, Earth would have to be performing daily 360 loop-de-loops, inverting upside down, coming back around, and NOT rotating on an axis, otherwise the same stars would not remain visible in the sky for well over 12 hours (as they do), and would all move across the sky horizontally!  The fact that we can see the same stars all night long revolving perfect circles around Polaris proves it is the stars moving relative to a fixed Earth and not the Earth doing roller-coaster loops around Polaris!  Also, the stars are all said to be at varying incredible distances from one another so their relative positions to each other should be shifting constantly.  In actual fact, however, all the constellations maintain their positions relative to one another day after day, year after year.  This is only possible if we are fixed and the universe is a fixed sphere moving around us, like a planetarium dome. 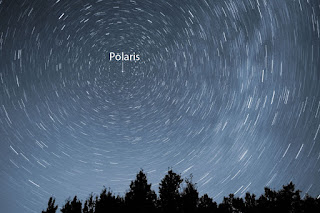 NASA and modern astronomy say the Earth is a giant globe spinning 1,000 mph around its central axis, traveling 67,000 mph circles around the Sun, spiraling 500,000 mph around the Milky Way, while the entire galaxy rockets a ridiculous 670,000,000 mph through the Universe, with all of these motions originating from an alleged “Big Bang” cosmogenic explosion 14 billion years ago.  That’s a grand total of 670,568,000 mph in several different directions we’re all supposedly speeding along at simultaneously.  No one has ever seen, felt, heard, measured or proven such motion, yet the vast majority of people unquestioningly accept that the clearly motionless Earth beneath their feet is actually moving over six hundred million miles per hour! 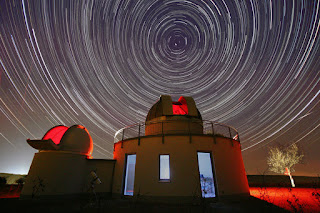 NASA and modern astronomy say Polaris, the North Pole star, is somewhere between 323-434 light years, or about 2 quadrillion miles, away from us!  Firstly, note that is between 1,938,000,000,000,000 - 2,604,000,000,000,000 miles making a difference of 666,000,000,000,000 (over six hundred trillion) miles!  If modern astronomy cannot even agree on the distance to stars within hundreds of trillions of miles, perhaps their “science” is flawed and their theory needs re-examining.  However, even granting them their obscurely distant stars, heliocentric astronomers cannot adequately explain how Polaris manages to always remain almost perfectly aligned straight above the North Pole.

If the globe-Earth was really spinning West-East 1,000 mph, orbiting the Sun counter-clockwise at 67,000 mph, spiraling around the outer-arms of the Milky Way at 500,000 mph, while shooting through the Universe at 670,000,000 mph, how is it even conceptually possible that Polaris, 2 quadrillion miles away, day after day, year after year, always maintains its alignment straight above the North Pole!?  That would mean from 2 quadrillion miles away, Polaris would have to be perfectly mirroring Earth’s several simultaneous wobbling, spinning, spiraling, and shooting motions.  Polaris would have to be shooting the same direction through the Universe at exactly 670,000,000 mph; it would have to be following the same 500,000 mph, 225 million year spiral around the Milky Way, and mirroring the same 67,000 mph, 365 day orbit around our Sun!  Or, the Earth is stationary - as common sense and everyday experience testifies.

“It is supposed in the regular course of the Newtonian theory that the Earth is, in June, about 190 millions of miles (190,000,000) away from its position in December. Now, since we can, (in middle north latitudes) see the North Star, on looking out of a window that faces it - and out of the very same corner of the very same pane of glass in the very same window - all the year round, it is proof enough for any man in his senses that we have made no motion at all.”  -William Carpenter, “100 Proofs the Earth is Not a Globe” (80) 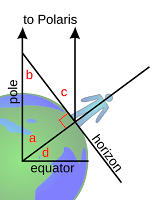 Not only this, but viewed from a ball-Earth, Polaris, situated almost straight over the North Pole, should not be visible anywhere in the Southern Hemisphere.  For Polaris to be seen from the Southern Hemisphere of a globular Earth, the observer would have to be somehow looking “through the globe,” and miles of land and sea would have to be transparent.  Polaris can be seen, however, up to approximately 23.5 degrees South latitude.

“If the Earth is a sphere and the pole star hangs over the northern axis, it would be impossible to see it for a single degree beyond the equator, or 90 degrees from the pole.  The line-of-sight would become a tangent to the sphere, and consequently several thousand miles out of and divergent from the direction of the pole star.  Many cases, however, are on record of the north polar star being visible far beyond the equator, as far even as the tropic of Capricorn.”  -Dr. Samuel Rowbotham, “Earth Not a Globe, 2nd Edition” (41)

“The astronomers' theory of a globular Earth necessitates the conclusion that, if we travel south of the equator, to see the North Star is an impossibility. Yet it is well known this star has been seen by navigators when they have been more than 20 degrees south of the equator. This fact, like hundreds of other facts, puts the theory to shame, and gives us a proof that the Earth is not a globe.”  -William Carpenter, “100 Proofs the Earth is Not a Globe” (71)

“Another thing is certain, that from within the equator the north pole star, and the constellations Ursa Major, Ursa Minor, and many others, can be seen from every meridian simultaneously; whereas in the south, from the equator, neither the so-called south pole star, nor the remarkable constellation of the Southern Cross, can be seen simultaneously from every meridian, showing that all the constellations of the south - pole star included - sweep over a great southern arc and across the meridian, from their rise in the evening to their setting in the morning.  But if the earth is a globe, Sigma Octantis, a south pole star, and the Southern Cross, a southern circumpolar constellation, they would all be visible at the same time from every longitude on the same latitude, as is the case with the northern pole star and the northern circumpolar constellations.  Such, however, is not the case.”  -Dr. Samuel Rowbotham, “Zetetic Astronomy, Earth Not a Globe!” (286)

Some heliocentrists have even tried to suggest that the Pole Star’s gradual declination overhead as an observer travels southwards is proof of a globular Earth.  Far from it, the declination of the Pole Star or any other object is simply a result of the Law of Perspective.  The Law of Perspective dictates that the angle and height at which an object is seen diminishes the farther one recedes from the object, until at a certain point the line of sight and the seemingly uprising surface of the Earth converges to a vanishing point (i.e. the horizon line) beyond which the object is invisible. 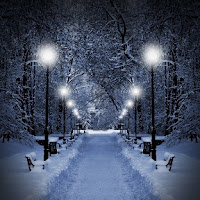 “If we select a flat street a mile long, containing a row of lamps, it will be noticed that from where we stand the lamps gradually decline to the ground, the last one being apparently quite on the ground.  Take the lamp at the end of the street and walk away from it a hundred yards, and it will appear to be much nearer the ground than when we were close to it; keep on walking away from it and it will appear to be gradually depressed until it is last seen on the ground and then disappears.  Now, according to the astronomers, the whole mile was only depressed about eight inches from one end to the other, so that this 8 in. could not account for the enormous depression of the light as we recede from it.  This proves that the depression of the Pole Star can and does take place in relation to a flat surface, simply because we increase our distance from it, the same as from the street lamp.  In other words, the further away we get from any object above us, as a star for example, the more it is depressed, and if we go far enough it will sink (or appear to sink) to the horizon and then disappear.  The writer has tried the street lamp many times with the same result.”  -Thomas Winship, “Zetetic Cosmogeny” (34) 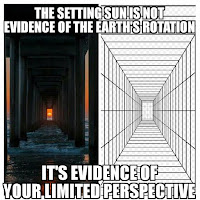 “It has often been urged that the earth must be a globe, because the stars in the southern ‘hemisphere’ move round a south polar star; in the same way that those of the north revolve round the northern pole star. This is another instance of the sacrifice of truth, and denial of the evidence of our senses for the purpose of supporting a theory which is in every sense false and unnatural. It is known to every observer that the north pole star is the centre of a number of constellations which move over the earth in a circular direction. Those nearest to it, as the ‘Great Bear,’ etc. are always visible in England during their whole twenty-four hours' revolution. Those further away southwards rise north-north-east, and set south-south-west; still further south they rise east by north, and set west by north. The farthest south visible from England, the rising is more to the east and south-east, and the setting to the west and south-west. But all the stars visible from London rise and set in a way which is not compatible with the doctrine of rotundity. For instance, if we stand with our backs to the north, on the high land known as ‘Arthur's Seat,’ near Edinburgh, and note the stars in the zenith of our position, and watch for several hours, the zenith stars will gradually recede to the north-west. If we do the same on Woodhouse Moor, near Leeds, or on any of the mountain tops in Yorkshire or Derbyshire, the same phenomenon is observed. The same thing may be seen from the top of Primrose Hill, near Regent's Park, London; from Hampstead Heath; or Shooter's Hill, near Woolwich. If we remain all night, we shall observe the same stars rising towards our position from the north-east, showing that the path of all the stars between ourselves and the northern centre move round the north pole-star as a common centre of rotation; just as they must do over a plane such as the earth is proved to be. It is undeniable that upon a globe zenith stars would rise, pass over head, and set in the plane of the observer's position. If now we carefully watch in the same way the zenith stars from the Rock of Gibraltar, the very same phenomenon is observed. The same is also the case from Cape of Good Hope, Sydney and Melbourne in Australia, in New Zealand, in Rio Janeiro, Monte Video, Valparaiso, and other places in the south. If then the zenith stars of all the places on the earth, where special observations have been made, rise from the morning horizon to the zenith of an observer, and descend to the evening horizon, not in a plane of the position of such observer, but in an arc of a circle concentric with the northern centre, the earth is thereby proved to be a plane, and rotundity altogether disproved - shown, indeed, to be impossible.”  -Dr. Samuel Rowbotham, “Zetetic Astronomy, Earth Not a Globe!” (284-6)

Anyone willing to look at this issue objectively need only see these undeniable and well presented facts to turn their back on the ludicrous and disgusting Globe Earth theory.