The United Nations, the New World Order government headquarters, built on land donated by 33rd degree Freemason John D. Rockefeller, is represented by a logo/flag which clearly depicts a Flat Earth divided into 33 sections! There are 33 official degrees of Scottish-Rite Freemasonry, and the UN flag features a Flat-Earth divided into exactly 33 sections! Why would the United Nations founders choose a logo/flag of a Flat-Earth map divided into 33 sections? How is it that C. Fred Kleinknecht, the head of NASA, retired and immediately became the head of the 33rd degree of Freemasonry? How is it that all the fore-fathers of the ball-Earth theory and so many NASA astronauts are all Freemasons? 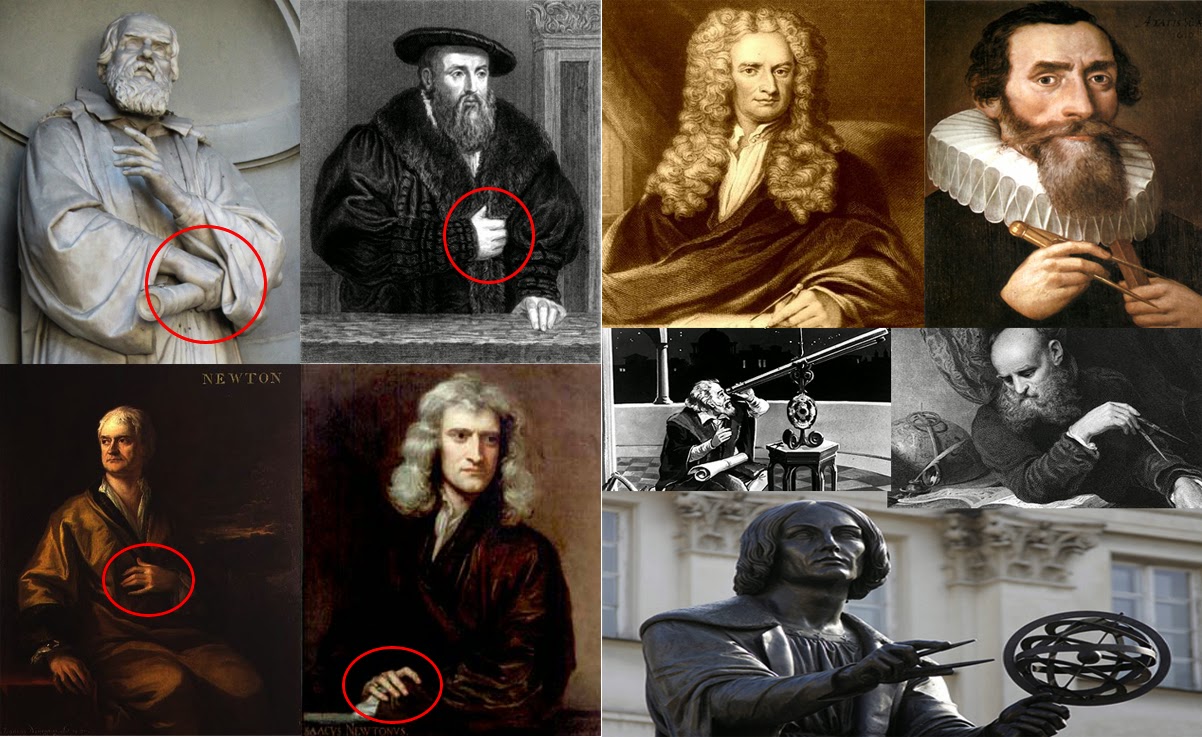 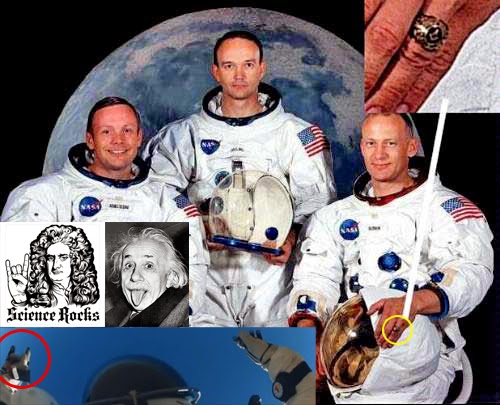 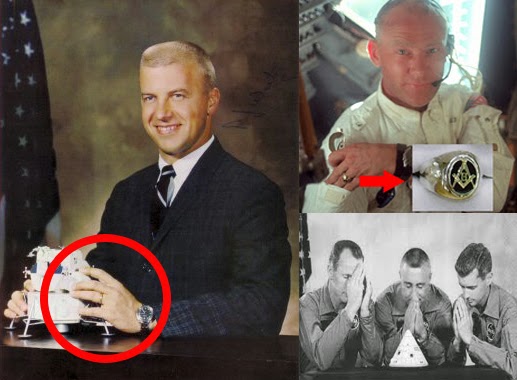 The usual "man-hole-covers" are flat discs divided into a bulls-eye target of 33 sections as well. 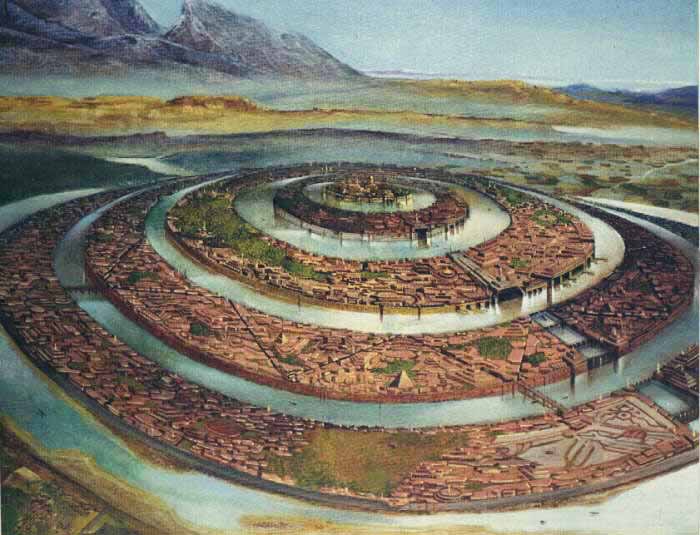 Atlantis appears to be a description of the flat Earth as it used to be drawn on ancient wheel maps in 3 sections of land and 3 sections of water (33 again).

In his letter to John Dee, Gerard Mercator quotes Cnoyen's description of the Northern regions saying: "In the midst of the four countries is a Whirlpool into which there empty these four Indrawing Seas which divide the North. And the water rushes round and descends into the earth just as if one were pouring it through a filter funnel. It is 4 degrees wide on every side of the Pole, that is to say eight degrees altogther. Except that right under the Pole there lies a bare rock in the midst of the Sea. Its circumference is almost 33 French miles, and it is all of magnetic stone. And is as high as the clouds, so the Priest said, who had received the astrolabe from this Minorite in exchange for a Testament. And the Minorite himself had heard that one can see all round it from the Sea, and that it is black and glistening. And nothing grows thereon, for there is not so much as a handful of soil on it." 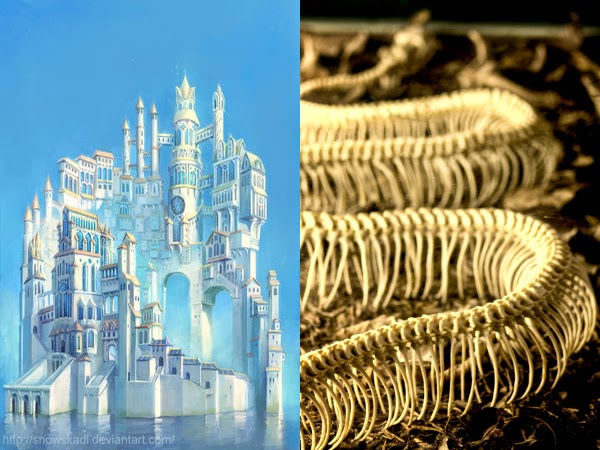 The Freemasons essentially stole, perverted and claimed for their own, not only the truth of our flat geocentric Earth but also many ancient mythologies and esoteric practices including Kundalini Yoga with its 33 degrees of Kundalini traveling up your 33 vertebrae spine: 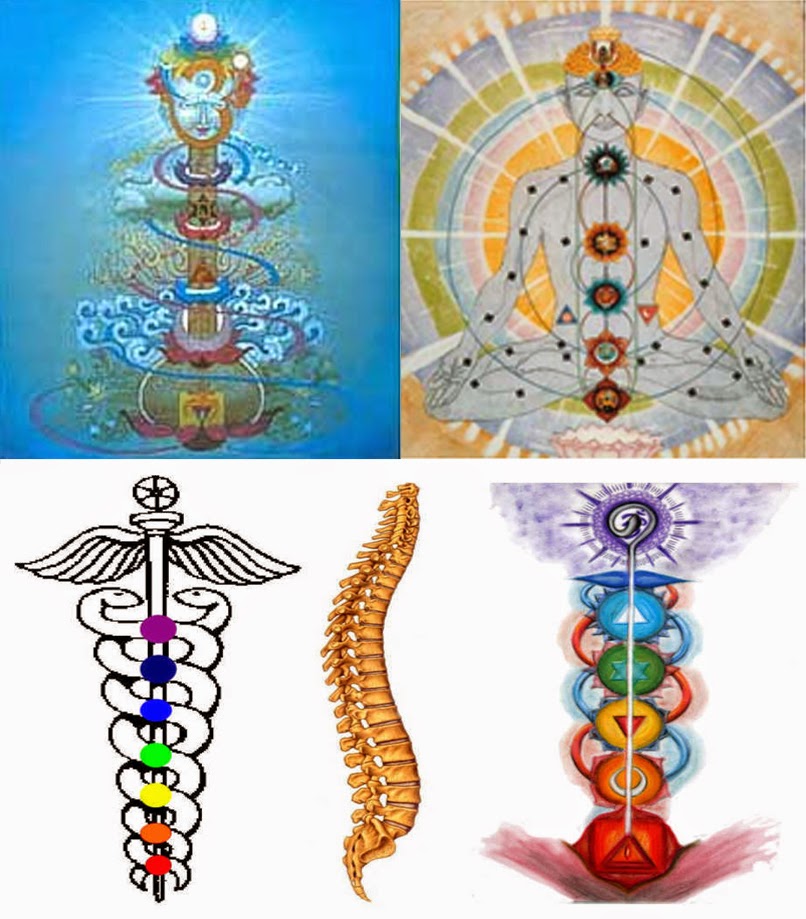 The same 11 Sephiroth and 22 paths (adds up to 33) also exists in the Jewish Kaballah, another ancient esoteric system that has been occulted and perverted: 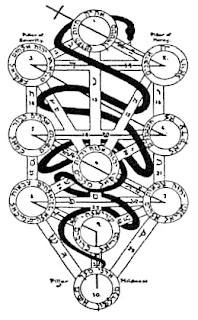 And yes, this is also why Jesus "lived" exactly 33 years, the first temple of Solomon stood pristine for 33 years, Kind David ruled for 33 years, Leah had 33 children, Freemasons have 33 degrees, and Atlas is your 33rd vertebrae:

Posted by gypsum on 05/14/2015
Hey Eric, I've been doing some reading on the Apollo 13 mission and saw this photo of the crew; it's actually right on the Wikipedia page for Apollo 13. Amongst the other glaring symbols, take a look at Jim Lovell's right hand.

This is apparently the new “Flag of the Planet Earth”:

Looks pretty lame if you ask me.
I don’t know about what could be the hidden (occult) meaning of this, but it’s 7 rings and 24 segments (if I counted correctly). 24/7…like the hours per day times the days of the week???
Mark Knight over at www.waykiwayki.com speculates it could have something to do with leylines on a flat earth, but I don’t think that’s very likely (could be though). 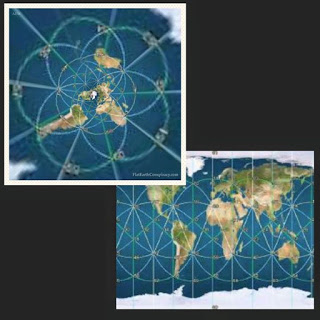 At first look, I don’t detect any hidden symbolism like a 666, baphomet or anything really. So as far as I’m concerned, it’s just a lame design that looks like a slightly distorted flower of life.
Here is one article about this new flag of the earth: www.inquisitr.com/2106132/nasa-replaces-american-flag-with-a-new-design-international-flag-of-the-planet-earth-to-be-used-during-space-travel/

Quote: ‘Centred in the flag, seven rings form a flower – a symbol of the life on Earth. The rings are linked to each other, which represents how everything on our planet, directly or indirectly, are linked.The blue field represents water which is essential for life – also as the oceans cover most of our planet’s surface. [color:c970=065806]The flower’s outer rings form a circle which could be seen as a symbol of Earth as a planet and the blue surface could represent the universe.’

Of course they also had to make a picture with this flag on Antarctica: 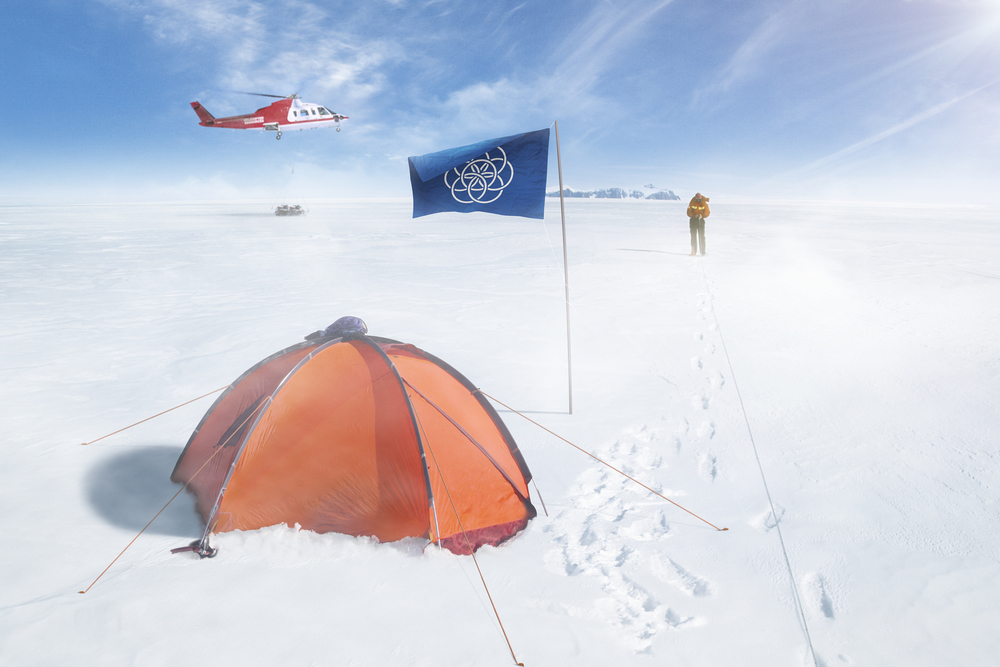 What do you think about this?
Smells like World Government bullshit. Wouldn't be surprised if they soon make a video with all those showbiz celebrities promoting this flag while "pledging their allegiance to a united world" or some BS like that (maybe playing Michael Jackson's "Heal the World" or "Earth Song" in the background).

As far as I can remember it was a Scandinavian guy who designed the flag. The article was a very long one and was served to media as if it was decided on. When first published you could read it just at the end, that it had no official connections.  It had good social media coverage, at least in my facebook circle. It must be the beginning of May, I thought it was a good business idea, reputation etc for the graphic artist even if he did not offer it to NASA

Probably it was the warming rounds of your scenario which is very probable.
_________________
All about Shillaphobia

Here's some info on them, as well as photos of places around the world where both the Seed and Flower of Life can be found (although there is some globe-centric speculation on the shapes being echoed in ley lines at the bottom of the page- but then immediately followed by an image of the Tree of Life which looks a lot like some of the proposed Flat Earth models with a great mountain in the center and ice surrounding everything): www.bibliotecapleyades.net/geometria_sagrada/esp_geometria_sagrada_6.htm

Additional info relating to the Seed of Life and ancient beliefs regarding the 7 stages of creation: scienceofwholeness.com/the-seed-of-life-and-the-seven-stages-of-creation/

"The Seed of Life represents the seven stages, steps, or days of creation. The creation of a vibrating pattern of space (electromagnetic radiation) is the actual process of creation itself which otherwise is symbolized by various concepts such as “days of creation” to make something otherwise almost impossible to explain, much easier to handle.

I (Shaktivirya) personally believe there was no actual “Big Bang” or moment of creation, as the process of creation or expansion “starts” within every moment of time regardless of how far into the past or into the future and regardless of location in space which seems to be boundless.

"The Seed of Life shows up throughout many Christian Churches, Synagogues, Kabbalah texts, ancient temples and archeological sites, such as the Osirian temple in Abydos, Egypt. The Seed of Life seems to be found in all of the main religions, and used by the occultists and the mystics alike. All manner of interpretations and meanings can be given to it, but the actual symbol itself remains as pure or impure as the meaning ascribed to it."

The article does also use some Masonic language with quotes like "The Seed of Life Is the Symbol of Creation and Fertility" (the generative principle being one of the most highly esteemed ideas in occultism) and "The Seed of Life is the Blue Print of the Universe" so it's not particularly surprising that this symbol would be used as a proposed representation of the so-called 'Planet' by Masons and the occultists running things.

I feel like most symbols, especially in regards to sacred geometry, which naturally occur on our plane of existence have been co-opted by the occultists since they have universal appeal to all conscious creatures living, by default, since they can actually be found within our biology. Check out the stages of the embryo in relation to sacred geometry for example. We're all encoded with these shapes, but they're used nefariously as a means to conceal truth, rather than express truth in a meaningful way.
_________________
All about Shillaphobia

Jun 24, 2015 15:08:31 GMT bemoody said:
Here's some info on them, as well as photos of places around the world where both the Seed and Flower of Life can be found (although there is some globe-centric speculation on the shapes being echoed in ley lines at the bottom of the page- but then immediately followed by an image of the Tree of Life which looks a lot like some of the proposed Flat Earth models with a great mountain in the center and ice surrounding everything): www.bibliotecapleyades.net/geometria_sagrada/esp_geometria_sagrada_6.htm

My favorite is the naga at Angkor Wat:

Regarding the flower of life...

...Yup, it is actually the seed of life. However it still looks a little different, because on the earth flag you can clearly see how each ring is interwoven with the others.
_________________
All about Shillaphobia

The flag is blue and white; I see deception and more Zionist nonsense attached to Fake Space.

Genesis 26:33; Isaac's servants name the well Shibah; and the city is called beerSheba.


Of course they take from Hinduism: 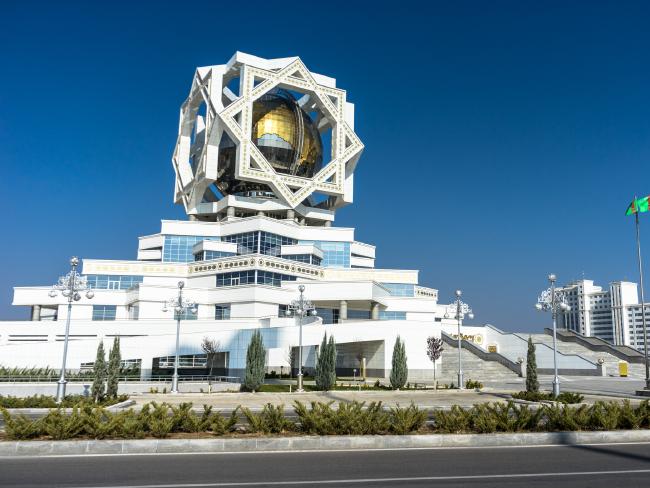 The Palace of Happiness in Turkmenistan, constructed under the reign of Saparmurat Niyazov.

Saparmurat Atayevich Niyazov (Turkmen: Saparmyrat Ataýewiç Nyýazow; 19 February 1940 – 21 December 2006) was a Turkmen politician who served as the leader of Turkmenistan from 1985 until his death in 2006. He was First Secretary of the Turkmen Communist Party from 1985 until 1991 and continued to lead Turkmenistan for 15 years after independence from the Soviet Union in 1991.

The symbology in The Palace of Happiness is quite obvious, I should not have to explain it here

EDIT: Oops, this was meant to go in the 'The Zionist Jew World Order' thread - feel free to move there (or where ever is more applicable)

The photo on the alter in the UN meditation room. Put in photoshop and reproduced then reversed and overlaid on the original. Shows the subject of the art to be moloch.

Greenmanman wrote:Could the flat earth movement lead to the new world order, seeing as the the UN and there map has this in mind?

The UN using the map is just them putting it in plain sight, in understanding of the occult - they do this to give them "power" - essentially just a form of public mockery.