How anyone can believe this crap is beyond me but here are the last 10 "Photos" of Saturn from Cassini!

Devastating Take Down... A precise video of only 5 concise minutes... that everyday FE researches can do and test for themselves via the links given underneath this video description on YouTube.

A video clearly showing the faking of Globe Earth Images / Pictures, every 10 seconds, from the (FAKE) Himawari Satellite... that is (NOT) in geosynchronous position over us...

I wish there was an award on the internet (given out by IFERS or ?) called something like the "Flatty" award...

I would award it to almost all of Eric's crystal clear videos and also to this YouTube video...

Great video!
I also noticed another smoking gun, the image shown at 4 mins into the video has the UTC time-code of 11.05am, it appears to be showing Australia in daylight, but Australia is 11 hours ahead of UTC (on the East coast) meaning it is 10pm at night, how can it possibly be in sunlight when it is October? Maybe if it was December 21st (Winter solstice) it could possibly still be light at 10pm, but no way on October 11th

Awsome video. Again and again they ram that simulation garbage down everyones throat and call it fact. Incredible that after all these years the powers that be can't get it right. It really takes time and energy to LIE when the truth is so much simpler.

Have you noticed a black box hidden on Google Sky at the Virgo constellation? You can see it if you use infrared. I wonder what they're hiding!

Some think it's Saturn being hidden, but I don't believe that. It's gotta be something else. Others think it's Nibiru, LOL! Here's a screenshot. 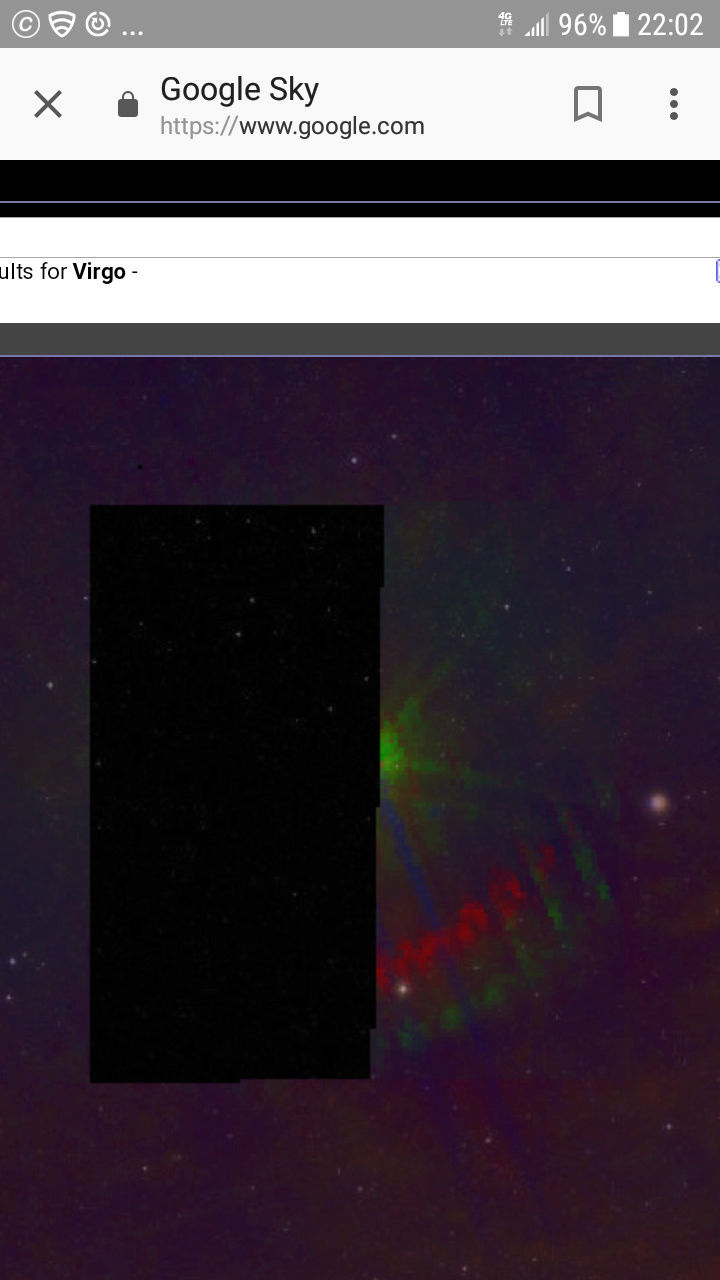 After coming across FE a few years back and experiencing my own paradigm shift with the basics, one of the elements in the FE conversation that has been interesting to me is understanding the source/origins/workflow for how they create all the cgi & space graphics.

The sheer volume of created visual material out there makes it interesting to think about the fact that someone, somewhere had to make it.  Raw creative work takes effort.

And if that is the case, the mindset of whoever is creating the imagery is interesting to me.  All sorts of questions pop up for me when I think about that.

Are they willfully being deceptive?
Are they well intentioned but unknowingly propagating untruth?
What "raw data" points are they using, if any, as a starting point for their visual creations?

It can obviously be a never ending waste of energy to try to understand all the inner workings of systemic deception, and answering questions like this aren't crucial, but for me it is helpful because it humanizes a bit of the machine that cranks all this stuff out.

Lies ultimately are propagated by people, either knowingly or unknowingly- more likely some gradation of both.

Polarizing ourselves against each other into conveniently labeled "sides" is easy, but it is important to remember that deception is only able to continue because a bunch of people kept letting themselves be complicit until complicity became normal. Our ability to transmute our polarizing instinct into love is what breaks that cycle... basically just my long way of saying I try to humanize people, even NASA artists.

So while that meme about the guy saying "it's photoshopped, but it has to be" gets a lot of play, I've always wanted to go deeper on this topic and wondered about how that department/those people at NASA might do their thing.

This video is glimpse into that, from the perspective of supporting the illusion.

Points of note that we're helpful for me:

1. The guy they're interviewing (who makes the images) seems to be all in, believing what he is saying.  I find this to be simpler situation than to view him as some sort of willful co-conspirator.  It is easier to contain a lie this way.

2. His raw data inputs for envisioning the images are essentially flickers of light and heavily pixelated "images." To quote the video "data. very, very complex data." Some of these are pretty funny.  So he sees a bunch of numbers plotted on a graph, then uses the narrative to which he's committed his career to contextualize that data into a picture or animation.

3. He says something to the effect of accuracy isn't the goal, communication and understanding of the is, showing his awareness of his role as storyteller.

4. This is me trying to read between the lines and assuming, but it sounds like they're using calculations (ie math, gravity etc) to use the light fluctuations (supposedly planets crossings in front of stars) and conclude things like planet density, watery vs rocky surface, size, etc...  Lots of big jumps from the original observation of a light fluctuating... if we even assume that fluctuation itself is being observed. All this really drives home how so much of this hinges on our man Cavendish and his serendipitous discovery of the big G.

Of course I've oversimplified what I'm sure are absurdly complicated mathmatics, but appealing to complexity isn't a solid rebuttal and sounds more like a redressed priesthood holding the keys to knowledge to me.

The world of visible appearances (Visibles) with its conditioned associations to metaphysical concepts, is NOT the physical, substantial (Tangibles) objective reality in which we live, and in which everybody is a natural scientist capable of making their own judgements.

Interpreting and visualizing complex data according to a mathematical model is a FORMAL science, a language with grammar, logic and rhetoric. It is NOT a NATURAL Science, such as physics, biology, chemistry.

Imagery and Mathematics can therefore NEVER deliver proof of physical reality. Mathematics relies on axioms and assumptions. Unfortunately theoretical physics nowadays mostly relies on Mathematics. Their conclusions are only as good as their assumptions.

So are the assumptions correct?
No they are deluded, absurd, contradictory and incapable of demonstration.

For me in a nutshell:

It is correct to argue from FACTS against Theories that contradict lived life. (No, water can't bend).
It is Pseudo science to argue from HYPOTHESIS against the known facts. (Yes it can, here is an image).

Note: Replace the absurdity of curved water, with your favorite logical fallacy regarding natural science such as vacuum, pressure, space, light ..... 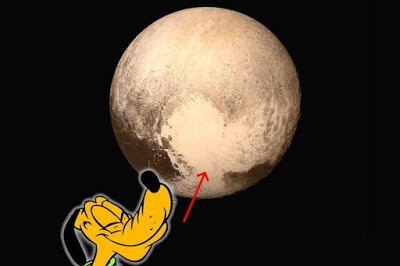 "It shows the region around the Pillars, which are about 5,700 light years from Earth, in incredible detail." 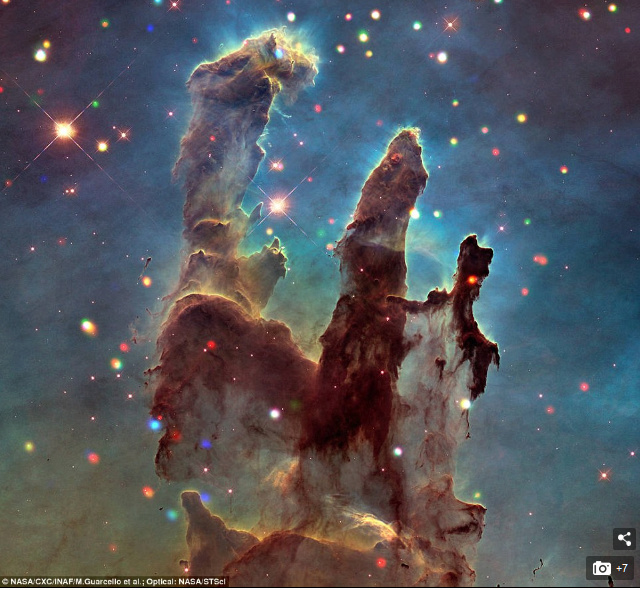 Can you spot the menagerie that the CGI folks have creatively included? 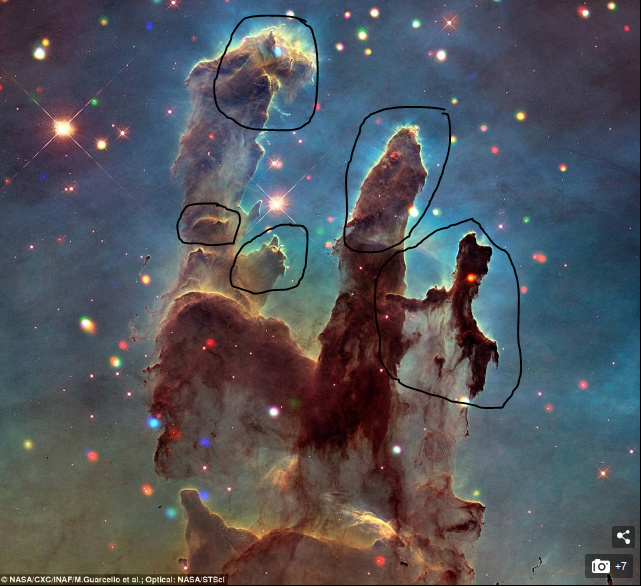 So only one man aye.

Today's in-flight movie will be entitled 'The Moon'.
Please sit back, relax, and enjoy the show.

I want to say I sincerely appreciate Eric Dubay's work. He has helped me to wake up to the reality of the world. It is now very obvious to me that the earth is flat and motionless and I always spread his name and videos. One point I have been unable to answer and has always been on my mind: in the video History of the Flat Earth around the 26:00 mark eric talks about Galileo's alleged discovery of "invisible stars" orbiting Jupiter, then the video shows a nikon p900 zooming into Jupiter. I have to say honestly I own a Nikon P1000 and I have personally zoomed into Jupiter and you can clearly see some lights or moons or stars or whatever that are near Jupiter and look exactly as Eric quotes Galileo as having described them. My question is this: why would there so much time devoted to an easily challenged claim that was made by Eric. What am I missing here? 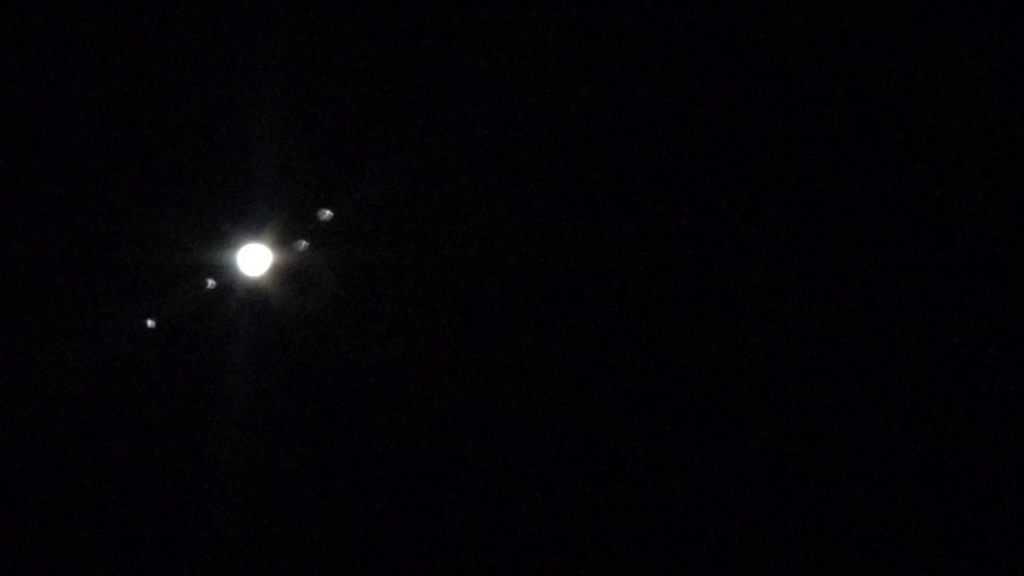 Galileo claimed these lights near Jupiter that appeared sometimes and other times not, were "moons" and this was his proof for the heliocentric theory. I'm aware that there are smaller lights near a bigger light named Jupiter, but they have in no way been shown to be "moons" (meaning objects similar to what we commonly call "the Moon"), nor does this assertion provide any proof whatsoever for the heliocentric model. My wording of that part of the documentary was not very clear and has unfortunately caused confusion making people think I'm unaware that Jupiter has other smaller lights around it.

Why is Earth the Only Flat Planet?

Another common question posed by Globe Earthers is, "if the Earth is flat, then why are all the other planets round?" To begin with, the Earth is a plane, not a planet, and by simply adding a "t" on the end modern astronomers have linguistically transformed our Earth plane into a globe spun around the Sun. The word "round" is also deceiving, because most Flat Earthers would agree that the Earth is round like a coin, just not round like a ball. When making this argument online, Globe Earthers will often present a picture of the traditional heliocentric model with eight spherical planets and a Flat Earth among them floating in space. This entire concept is a strawman, however, as no Flat Earthers believe in a flat planet floating in space third from the Sun in a heliocentric solar system.

In NASA's many CGI depictions the planets do indeed appear spherical, but when looking at them for yourself through a telescope or super-zoom camera, it is certainly contestable whether or not the planets are spherical. Every time I have personally observed the planets they look like small, relatively flat, round lights and nothing like huge spherical terra firma worlds. Only in NASA and other "official" space agency footage do the planets appear like three-dimensional globular worlds; in amateur footage they look more like two-dimensional lights, similar to all the other stars. In fact, before they were called "planets," the ancients referred to them as "wandering stars" because they only differed from the other "fixed stars" in their relative motions. They each have their own unique appearance, but none of them look like spherical worlds, even Saturn which appears more like a circular luminary with a halo of light around it.

Ultimately, however, it is completely irrelevant what shape the other planets are when looking to prove the shape of the Earth. Modern astronomers constantly repeat this red herring that I have dubbed the "appeal to the sky" fallacy. Imagine inviting a contractor over to your house to measure the dimensions of your floor and instead they immediately get out their tape-measure and start measuring all the recessed lights in the ceiling! This is exactly what Globe Earthers are doing by claiming to provide scientific proof for the shape of the Earth under our feet by looking at lights in the sky over our head. Like magicians distracting you with one hand while fooling you with the other, globe apologists when asked for empirical, measurable proof of the shape of the Earth beneath their feet, invariably inevitably instead turn their noses up to the sky and start talking about the shape of things up there. But even if all the other planets really were spheres, what on Earth does that have to do with the shape of the Earth?